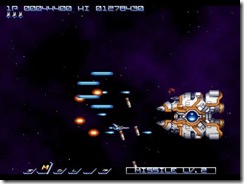 Speed up! Gradius ReBirth finally arrives after being released in Japan six months ago and nabbing an ESRB rating in October. Konami’s shooter sticks to the basics ripple lasers, shooting the core, and rock chucking volcanoes. Those landmarks are in Gradius ReBirth along with the replica of the first stage. Gradius ReBirth might not be made from scratch, but the 1,000 WiiWare Points ($10) gets you classic shooting with unlimited continues and a score attack mode linked to online leaderboards.

Also on the retro side is Alex Kidd: The Lost Stars, a Sega Master System game where Sega’s forgotten mascot searches for twelve zodiac signs across six levels. This flashback goes for 500 Wii Points ($5).