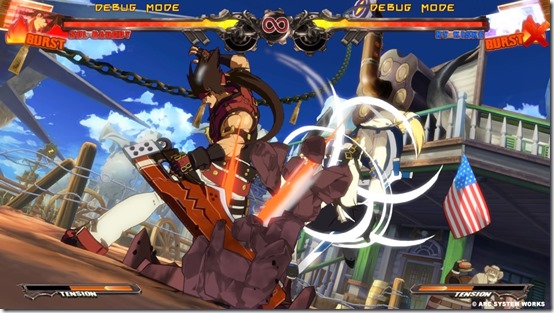 Arc System Works will be holding location tests for the latest in the Guilty Gear series, Guilty Gear Xrd –SIGN-, at the Sega Akihabara Building for the next few days. Here’s a look at some of the content in the playing manual that will be available at the event. 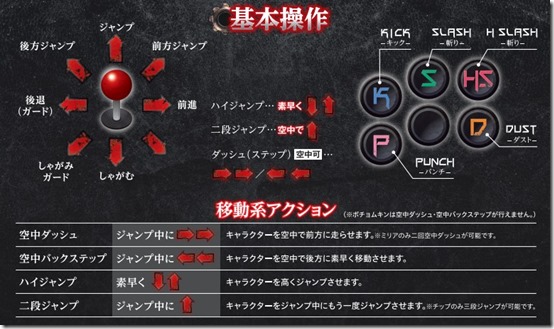 The controls will be in the same format we’ve become familiar with in the Guilty Gear series. There will be the Dust attacks with a newer system, and dashes, high-jumps and double-jumps will be performed in the same manner as they previously were. 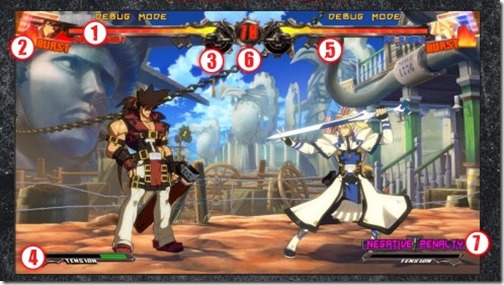 While some of the marked points on the screen are obvious to anyone who’s ever played a fighting game (such as the health bar), there are some that are unique to the Guilty Gear or BlazBlue series. 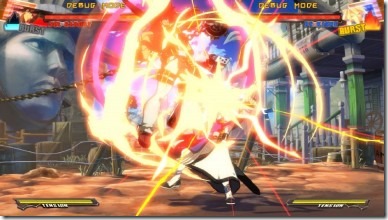 For example the Burst gauge shown at (2) above fills up over time or by taking attacks. Once it’s full, you can use it to perform a “Psych Burst,” which uses up your entire gauge but can help out when you’re in a pinch by blasting your opponent away. Additionally, successfully landing the Psych Burst will instantly fill up your Tension Gauge (#4) which can be used to pull off special attacks and Roman Cancels.

Previously, the Dust attack was used to launch opponents into the air, followed by aerial-combos. In Guilty Gear X3rd –SIGN-, it is a special move that can’t be blocked by crouching, and follows up with two different patterns. By pressing up after the opponent is launched into the air, you will follow them, similar to the older Guilty Gear games. By pressing either right or left, you launch them forward while remaining on the ground, making it possible to connect with powerful attacks.

Additionally, the air-recovery feature will be making a return as well. This move is done by pressing any attack button after getting hit into the air. The “Faultless Defense” is much stronger than the regular guard, as it requires holding down two attack buttons while guarding and gradually depletes your Tension Guage.

Finally, the “Dead Angle Attack” is a more offensive version of the Faultless Defense, that is done by pressing left or right, along with the two attack buttons while guarding. This action uses up 50% of your Tension Guage, but you get to your opponent with a counter-attack in the middle of the guard.

The Roman Cancel is a technique in the Guilty Gear series that allows you to eliminate recovery time or interrupt movement and actions, by pressing the three attacking buttons (minus the Dust button,) in exchange for 50% of your Tension Gauge.

Additionally, you can also use the Roman Cancel’s effect of slowing the time of everything but your character’s. For example, you can use it while using a projectile then hit your opponent with a simultaneous flurry of attacks along with the slowed projectile.

When two players hit each other with attacks at the same time, it results in what’s called a “Clash”. There are three different patterns for various situations when this happens.

The regular Clash (to the left) is when two close-ranged attacks hit simultaneously. When this happens, either player can take another action right away. On the right is “Repel,” which happens when a stronger attack collides with a weaker one. When this happens, the player who performs the weaker action will be repelled, and left open to attack. 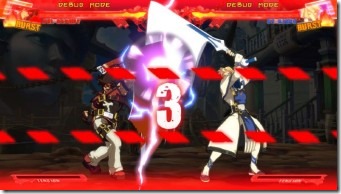 Finally, “Danger Time” occurs when both players collide with stronger attacks, which results in a short cinematic scene. Once you’re in Danger Time, whoever gets the first hit will start a Super Counter, which allows for massive combo attacks.

Guilty Gear Xrd –SIGN- is currently in development, and is being considered for next generation consoles.