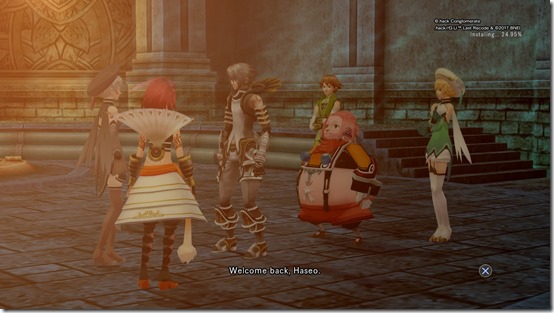 People who mastered the .hack//G.U. trilogy and earned Vol. 3//Redemption’s extra ending know the series ended on something of a cliffhanger. We had the hint that Haseo would meet “that man” again, but never saw it happen. Now that .hack//G.U. Last Recode is here, we have closure. We have been given access to an epilogue that lets us say a final goodbye to the series. And, after playing it, I must say that it does a good job of clearly bringing people up to speed, keeping you on task, and letting you say your final goodbyes.

.hack//G.U. Last Recode’s Vol.4//Reconnection should not really be described as a full game. Had this trilogy originally come out on the PlayStation 3 or PlayStation 4, instead of the PlayStation 2 as it did, this would be more of an add-on. It alerts you to this the second you start the game. Many of the features and functions that made the .hack//G.U. trilogy feel so alive and like an actual MMORPG. You can not access Mail Station, Crimson VS, News Capture, the Community Forum, Official Forum, or Official Site. When playing the game, you can’t talk to certain NPCs, ride bikes, take quests, access certain shops, participate in Avatar Battles, access Bookmarks from the previous three volume, or go to any town other than Mac Anu. This is an incredibly streamlined adventure. You do have access to some Bookmarks, both story-related and optional, but this segment very much wants you to follow a specific course. 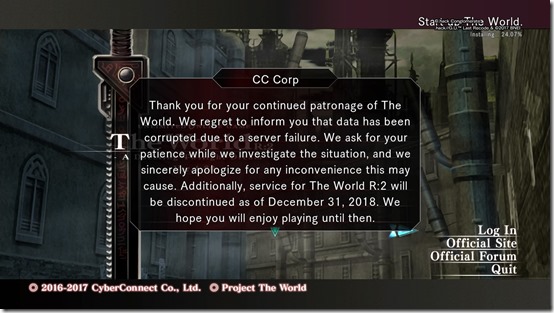 The thing is, Vol.4//Reconnection does a good job of making this seem plausible. After the fallout from Vol. 3//Redemption and other illegal activity, The World is not doing well. There will be deliberate noise as you play, causing the screen to behave strangely and odd sounds to play. Parts of the game are shutting down. When you speak to Alkaid, it is one of the first things she brings up. This sudden shift is not only surprising to us, but to Haseo. Atoli points out that he has spent the last year trying to work with Pi to save “that man”. He is as unaware of the disrepair, making his reactions and straightforward behaviors more believable. He is more focused, The World is emptier, and we go in knowing there is a job to do.

What helps is that .hack//G.U. Last Recode is rather good about catching you up in Vol.4//Reconnection. There is a brief, animated montage that covers pretty much everything that happened in the first three volumes and leaves you understanding how important Haseo, Ovan, and Shino were. The first fifteen or twenty minutes is all about catching up with friends. Should you go ahead and enable Cheat Mode, which maxes everything out and gives you all the items and equipment you could need, stick to the storyline, and not dawdle, you could probably be done in around two hours. Maybe even less than that? And since there is so little content compared to the previous games, you can easily jump into that first, savor that reunion you may have been waiting for, then go back for a full trilogy replay where you continually carry saves over. 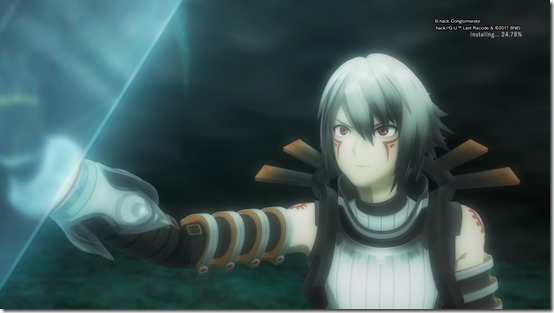 It also looks and feels like the previous .hack//G.U.games. It is in tune with the previous titles, in terms of mechanics. It expects familiarity and knowledge of the series, not talking down to you. Rather, it feels like it reminds you when concepts come up, as though it knows you probably are aware of all these concepts because you actually bought .hack//G.U. Last Recode. But it won’t run through extreme details going over who everyone is, why they matter, and how they affected Haseo’s life. There is a comfort here, from the controls to the equipment (on Cheat Mode, since people coming to this point probably put in their due diligence in past games) and gameplay elements. Things may be sparse, but there is enough there to provide closure.

.hack//G.U. Last Recode is about appreciating a trilogy and giving it the final send off and credit it deserves. While its new fourth installment, Vol.4//Reconnection, is not going to be a 30-40 hour game like its siblings, this brief adventure does not need to be. It is about providing a final send-off to a beloved series and making sure people feel like it has left no stone unturned at the end. It does this, providing a final service to the fans. While it may sound silly to recommend playing these games out of order, I would suggest people who did play the original trilogy consider starting with Vol.4//Reconnection before heading back to play the original three again.

.hack//G.U. Last Recode is available for the PlayStation 4 and PC.