There’s a type of game for everyone. If your idea of a game is one that has hours on hours of cut scenes, hand-holding, repetitive dungeons, button mashing, and a plot that seems to go nowhere, then volume one of this .hack series is just what you’re waiting for. For everyone else, watch the anime series instead.

The story so far, as told through many lengthy, but fortunately skippable cut scenes revolves around Haseo, the player controlled character. Haseo was once a fearsome PKK — a player killer killer. He was known for killing other PKers and things seemed to be going fine until he met Tri-Edge, the most fearsome PKer of all. Tri-Edge has an unexplainable ability: he can not only kill a player’s character, but also put the player into a coma in "real life". After losing a battle of revenge with Tri-Edge, Haseo was mysteriously knocked down from level 133 back to a level 1 character, which is where we start the game. 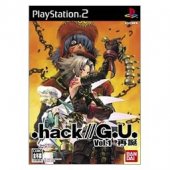 Rebirth is the first .hack game I had a chance to play, so I was excited about the pseudo-MMO aspect of the series. Towns are well stocked with people running about, NPCs, and shops, which is impressive considering the limits of the PS2. Everyone you passed by seemed to have something to say. (If only real MMOs had players who were as eloquent and coherent.) The whole logging out, checking email, and reading forums parts are nice touches and made me feel as if I were really on a computer playing an MMO. Unfortunately, they should have implemented email checking while still logged in to the game because the time spent logging out and reading email for clues could be better spent reading real email. As immersive as the game tries to be as an MMO, there were still parts of the game that made me realize that it still is a fake MMO with limits. I tried to invite a different character than I was supposed to in my party before starting a required quest, but I couldn’t get into the dungeon because I had the wrong character with me. No other explanation except that I was “supposed” to take a specific one.

Although the developers have stated that G.U. stands for "Grown Up", I have a hunch it really stands for "Gackt Up." How else could you explain the protagonist’s resemblance to Japanese pop sensation Gackt? I wish there were something I could like about Haseo, considering he’s the character players have to spend the most time with, but there are no redeeming qualities about him. He’s just your average whiny, annoying adolescent boy with a superiority complex. Like all the other generic characters I encountered in the game, Haseo’s grating voice is made worse by the terrible voice acting. I could forgive the voice acting if there was an option to turn off the English voices and turn on the Japanese, but that option seemed to be missing.

Despite characters having fancy boots and equipment on my character, dungeons are difficult to maneuver. See that shallow stream of water separating one island from another by about two feet? Sorry, can’t walk over that, go find a bridge. See that little incline in front of you? Sorry, can’t walk up that, go find a smaller incline. Repeat that about ten more times, and you get the gist of what dungeon exploring feels like. Quests and game-progressing missions in dungeons feel like a chore disguised as a fun little game. I guess everyone spends their days in towns, because other than monsters and the rare NPC or two, dungeons are sparse and confusing thanks to the repetitive textures. Most dungeons consists of a series of hallways, round rooms, and Chim Doors, all of which don’t have much variation. Don’t let the whimsical name of Chim Doors fool you — they’re just the lazy coder’s way of extending gameplay. Chim Doors are initially locked and can only be unlocked by offering the specified amount of Chim-Chim essence to the door. The essence is acquired by kicking Chim-Chims, which are little round characters who ride around on trains or escape from pipes. The first couple of times, releasing the Chim Chims and then kicking them was fun, but after that, it became an annoying waste of time.

These Chim Doors may be the developer’s way of giving the player a break from actual enemy battles, but if the battles weren’t so brain numbing, players wouldn’t need the break in the first place. First, a slightly complicated battle system is explained: normal attacks, skills, items, special Morale skills, etc. All this is just a guise for how to win a battle: pressing X repeatedly. I won most battles by just smashing X over and over again and using a skill (trigger and a face button) when my hand got tired.

Luckily, there are plenty of cut scenes to give my hand a break. After a few hours of the game, I was actually looking forward to cut scenes because I wanted to know more about the story, but didn’t want to play the game. Unfortunately, the cut-scenes aren’t exactly the best. To make up for the lack of facial cues, the developers gave characters over-dramatic gestures that somehow make the dialog worse. Don’t worry if you missed something in the dialog while you were distracted by some character waving its arms, whatever was said will be repeated at least four more times in that same cut scene. (I may be over exaggerating, but not by much.)

Then, there’s the needlessly complicated menu.  Almost as if the developers were trying to compensate for the simplistic battles, the menu system is less than intuitive. Pressing ‘triangle’ will bring up the menu, which can be scrolled through. The Items sub-menu is used to show items and equipment. I would have thought selecting an equipment would give me an option to equip it, but that would be too easy. Instead, I have to exit the Items sub-menu, go to the Equipment sub-menu, and then equip it there.

There were a few redeeming things about the game that were done right. The first one was music. If you like Yuji Kajiura’s techno opera, you’ll feel right at home with the music in Rebirth. While not composed by Yuji Kajiura, the music sounds very similar to what she has done in a previous .hack game and in the Noir anime series. Another thing the developers did right was the inclusion of a game log, in the form of a Memoir option in the menu. The game log is great for people who get side-tracked, or forget what they’re supposed to do next because it states exactly what needs to be done to further the story. This may be a little too much hand holding for most, but I like it.

As much as I wanted to like the game as a whole, there’s just too much about it that makes it not enjoyable. After a few hours, I felt like the game was going no where in terms of plot and the battles were just a chore. If I had rented this game, I would have returned it after a day. It’s not the type of game where you think, “Maybe if I just gave it another chance, it’ll get better.” Tedious battle systems don’t get better no matter how many chances you give it.

Overall: While the concept of a pseudo-MMO world is a good one, the execution in Rebirth was severely lacking.