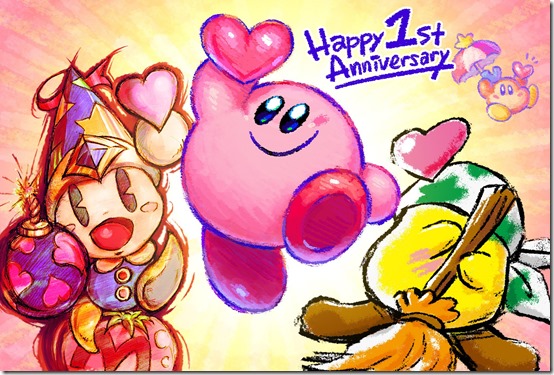 For the first anniversary of Kirby: Star Allies’ release, HAL Labs and Nintendo released a picture drawn by various artists at HAL Labs, as well as a message from game director Shinya Kumazaki.

Here’s the message below, found on the Japanese version of the picture post on the Nintendo Switch News section:

To mark this occasion, the staff worked together on a commemoration piece. Please take a look!

After finishing development on Star Allies last year, we went straight into developing three waves of free updates, and continued to run our course for nearly one year after the main game’s completion.

Let’s celebrate Kirby even harder than we already have! With that determination in hand, Star Allies was born as game that celebrated many Kirby games for its 25th anniversary, as a finale to cap off the 25 years of Kirby.

Although it was tough, with these free updates, the game world has continued to expand, and I’m happy that players from young kids to returning fans were able to enjoy the game.

By the way, this commemoration illustration also has a bit of history behind it.

The friends shown in this illustration, have in fact been around since the first Kirby game. You could say they are the starting members.

The person who drew the Poppy Bros. Jr. on the left was me, Shinya Kumazaki.

In the middle, the protagonist, Kirby, was drawn by Design Director Riki Fuhrmann. You can also see a Parasol Waddle Dee at the back.

And the Broom Hatter on the right side, was drawn by Hitoshi Kikkawa, who has been a designer since the first Kirby game, over 25 years ago.

This illustration itself is a result of several designers across the series working together, adding their own touch to create a very vibrant commemoration picture.

Our team at Hal Labs have continued onwards thus far, while being supported by the many staff members who have helped with the series, and inheriting what makes Kirby ‘Kirby-esque’.

I believe that Star Allies has become a title where you can feel the new future for the Kirby series, as well as the path that the series has taken up until this point.

I hope that you can continue to have fun with this game with family and friends while appreciating the above!

Well then, see you next time.