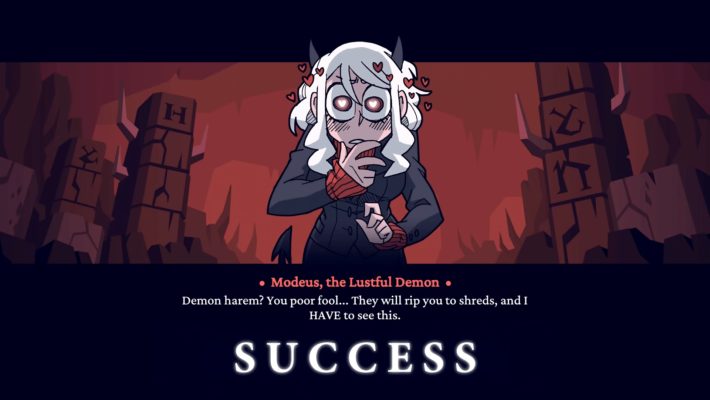 A new, free puzzle game with light dating sim elements has been tearing up Steam this month, and now even more people can play. Helltaker is latest update makes it compatible with multiple operating systems. Now someone on a Windows, Mac, Linux, or SteamOS device can journey down to hell to try and build up a harem of demonic women.

So how do you get a demon girl harem? Well, apparently in Helltaker it involves completing puzzles within a certain number of moves so you get a chance to talk to one of these women. Then, when you do finally reach and speak with one, you have to choose the correct dialogue option to convince her you’re worth their time. Oh, and wrong answers result in you being severely injured or killed.

Helltaker is a Lukasz Piskorz game. Patryk Karwat handled the sounds and the soundtrack consists of Mittsies songs. Ahead of launch, Piskorz even released art and elements like a comic following Malina, the Sour Demon.

Preparations before the game. (2/5) pic.twitter.com/h9VKPXqeyK

The game is getting heated. (3/5) pic.twitter.com/M348bBxPqx

Games… can get lonely sometimes. (4/5) pic.twitter.com/f30nlQgAzU

Helltaker is available for free on PCs. While it is short, there are multiple endings.