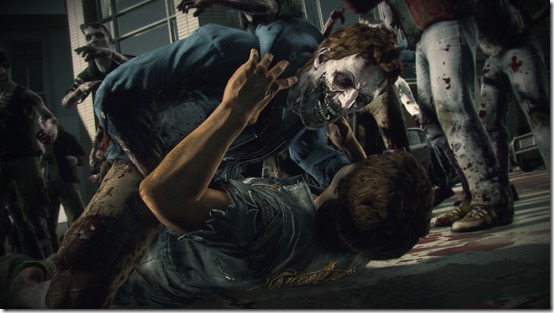 The biggest change in Dead Rising 3 is you can play the game with or without the timer. Previous Dead Rising titles were a race against the clock. A timer was always counting down whether you were killing zombies, trying on costumes or rescuing people. Instead of the clock being a threat, zombies are the threat in Dead Rising 3.

In regular mode, Dead Rising 3 doesn’t have a timer, so you’re free to explore the world which Capcom Vancouver says is several times bigger than Dead Rising 1 and Dead Rising 2 combined. The story still has branch points and players will be able to choose which path they want to go on. These choices stick, so depending on your decisions you may or may not unlock Overtime, a game and story extending episode. Fans of the series can play Dead Rising 3 in Nightmare Mode which has the timer and manual saves. You can also play at your own pace in regular mode and after leveling Nick up move him to Nightmare Mode. This starts your story progress all over again, but it will make Nightmare Mode easier and Capcom Vancouver says Dead Rising 3 is more difficult than the other games. There are rewards for completing Nightmare Mode, but Capcom wouldn’t say what those are.

Speaking of the story, Dead Rising 3 has different factions. The town of Los Perdidos is locked down and people infected have to register with the government. One group called "The Illegals" lives off the grid instead. "The Illegals are infected with the virus. Legally, they are supposed to have a chip installed in them that has GPS tracking and it administers them a dose of medicine where they are not going to turn into a zombie. And if they do, it alerts the government so they can control zombie outbreaks," producer Mike Jones explained to Siliconera. "Illegals are people that reject that and don’t want to sign up for some crazy government stuff. They have to live outside of society and find their own Zombrex and stay alive in their own way. You’ll see as the story plays out, there are different factions in the game."

There is a key character Rick will run into who is connected to the Illegals. Rick’s initial goal is to escape Los Perdidos by repairing a plane. He’s a mechanic and I asked why Capcom Vancouver chose that background for Rick. "It gives a bit of fictional background to why he’s so handy. Why he can combo stuff anywhere. Unlike Chuck, he can combo weapons anywhere in the world at anytime. There are also interesting angles with vehicles that we haven’t gotten into yet. We’ll leave that for later on, but you know he worked as a car mechanic," Jones answered. 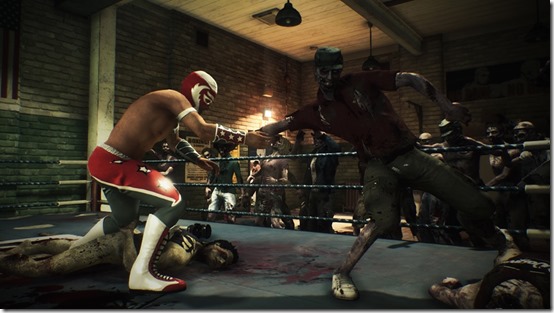 Capcom Vancouver developed Dead Rising 2 with Keiji Inafune, the original creator of the series. Inafune has since left Capcom to form Comcept and a number of former Dead Rising team members are working on Yaiba: Ninja Gaiden Z. We asked Jones if developing Dead Rising 3 was different since Inafune is no longer with the company.

"Inafune originally wanted to partner with Blue Castle Games for their perspective. For their vision and for their spin of what Dead Rising was. That became Dead Rising 2. From the early days of Dead Rising 2, they entrusted the guys at Blue Castle in Vancouver with a lot of the vision and creative direction of the product. Those guys created the franchise and that jewel of the Capcom crown – we’re standing on the shoulder of giants, so to speak. But, what Dead Rising is and the game that it is is still intact," said Jones.

Of course the wacky stuff Dead Rising is known for is still intact. Combo weapons like the grenade taped to a football (called a Hail Mary in Dead Rising 2), an axe launcher, and a fireworks shooting crossbow are in Dead Rising 3.