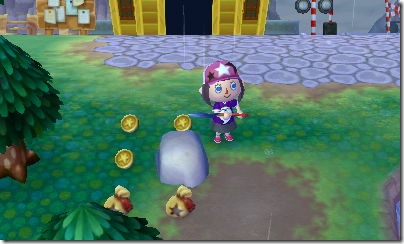 My third day in Animal Crossing: New Leaf and my town Crawford was bustling. My home expanded, there was a new neighbor, I received my development permit, I dabbled in clothing design and I was even able to visit someone else’s town for an orchard construction project. Most important of all, I finally was able to buy a fishing pole!

This fantastic day began with the fishing pole acquisition. My first stop was Main Street. I wanted to see what the damage was for my home expansion and check Nooking Junction. Nook informed me that I now owed almost 100,000 bells, which made my jaw drop. However, Timmy’s store had a fishing pole, so I quickly recovered. Fish in Animal Crossing are scaly gold!

Before that, however, I decided to check in at Able Sisters to make my very first Pro Design. I figured I was already in town and in debt, so why not drop a couple thousand bells to make some glorious outfits?

Oh. Em. Geez. I have to say—Animal Crossing: New Leaf‘s clothing designing system is much improved. I wish I could post screenshots of the actual design process, but it all takes place on the touch screen and thus wouldn’t be much good. Here’s an idea: If a sleeveless dress or shirt is made, there are images for the front and back to design. If it has sleeves, you get front, back, left and right sleeve layouts to create. All that’s old news though, to anyone who’s played Animal Crossing: City Folk. The real news is palettes.

You can now design your own color palettes. I’ll let that sink in for a second.

For those wondering what the big deal is, typically Animal Crossing games have a handful of assigned color palettes for outfit creation. You have to make do with the colors available and hope they fit the theme you want. If they don’t, you adjust. Not so in Animal Crossing: New Leaf. You make those palettes fit your needs. All you do is highlight a color, then select the tube of paint icon next to the palette icon. A menu will show up with varying hues of blue, green, red, purple, orange, yellow and more.

I got a bit misty. I could finally be the Animal Crossing fashion mogul I was meant to be. Now, I don’t want to get into my outfit explosion just yet (that will come in a whole other article), but I do have to show off two of my “creations.” 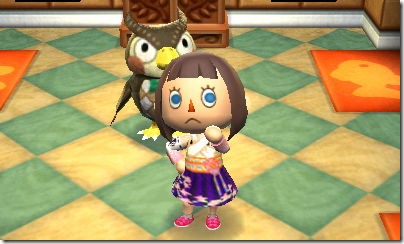 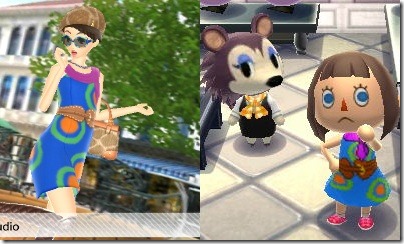 Next, we have a “who wore it better” situation, featuring an appearance from the Style Savvy Trendsetters Gracie Grace dress DLC!

As I left town, I happened upon my newest Crawford immigrant, Rocket. Rocket has issues. That’s a polite way of saying she’s a gigantic, 400lb gorilla in a pink-and-white jumpsuit that says, “Vroom” a lot. It’s endearing, in a way. I suppose I should be proud, as when I went to do some private investigation on my newest citizen with my friend G. Oogle, I learned she’s new to the Animal Crossing universe and even has an entirely new “Big Sister” personality. I guess I’ll try and keep her. 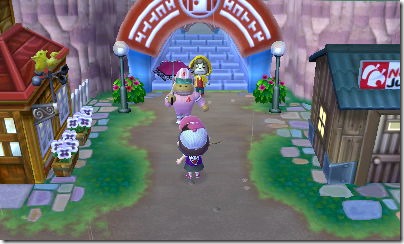 Of course, I have more important things to do now than spend the day talking with Rocket. I had to pay a visit to Isabelle in City Hall to find out what was up with this Development Permit. When I loaded up Crawford, she told me then that my approval rating was high enough to apply. As we chatted further, she explained that in a few days, I’d have permission to start passing Ordinances, which would set rules for the town, and begin Public Works Projects that would change the appearance of the town and add items like benches, fountains and extra bridges.

But, that won’t come until tomorrow. I have fishing to do. Fortunately, it’s a rainy day in Crawford, and any Animal Crossing veteran knows that’s the only time to get your fish on! Let me tell you, I have had a ball and, as I’m on day 6 in real life as I write this, I can attest that it isn’t just in the rain that fishing is awesome. I’ve noticed new fish, like an Oarfish, and the rivers, lakes and ocean are just stocked. The third day went especially well, as I was pulling in Red Snapper, Barred Knifejaw, Clownfish, Cherry Salmon and Koi like crazy. I noticed a few new puns in there too. With this fishing bounty, I was able to put over 50,000 bells towards my new home loan. Take THAT Nook! 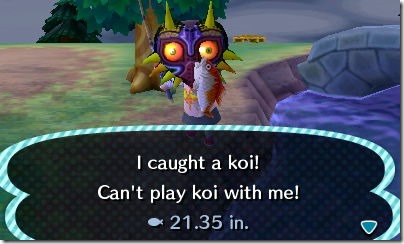 Still, as lovely as Crawford is, you can’t just limit yourself to one town in Animal Crossing: New Leaf. You have to go out and have new adventures—especially since there is fruit to collect! I’m never happy with my town until there’s an orchard in it. Fortunately, Anne Lee of Video Game Writers was kind enough to invite me over for a brief visit to her Japanese copy of the game to shake some trees and visit her shops.

Her town? It’s a wonderland. I wish I had thought to take more screenshots, but I was too dumbfounded by the array of fruit to even think of such a thing. Which is a pity, because her town, Mame, is absolutely lovely. There were gorgeous paths, lined by fruit trees and flowers, a fountain, Brewster’s Cafe and a fully stocked main street. It was a lovely place to visit. Sadly, the only photo memento I have of that trip is this one of Brewster. 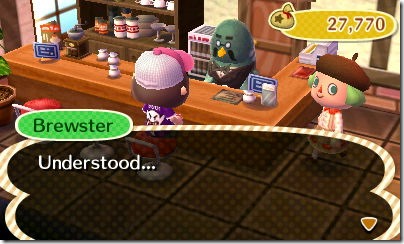 I’m sure you’ll forgive my neglect though. See, I was too shocked by the presence of new fruit. I had come to Mame expecting to pick up some oranges, pears and cherries. Imagine my shock when, after picking up some oranges, I noticed a strange variety of cherry. After asking permission to shake that tree—you NEVER touch ANYTHING in ANYONE’S town without permission in Animal Crossing—I went for it. I was expecting to acquire three perfect cherries. Instead, I now had lychees in my inventory. Bwuh?

Animal Crossing: New Leaf has new fruit. You can collect lychee, durians, persimmons (Percy!), mangos and bananas! Bananas are planted on the beach, naturally. Frankly, I was in shock, which led to my lack of image capturing in Anne’s lovely town.

That isn’t the end to my tale of visitors though! As I had mentioned before, you can’t beat fishing in the rain in any Animal Crossing game, so I figured I’d check the other beach in Crawford to do some fishing there. Imagine my surprise to see a familiar sailor on the shore. 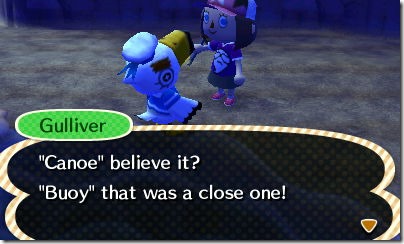 It’s Gulliver! He had washed up and, after about six attempts, finally pulled himself together and woken up. We chatted, and he wasn’t sure he could remember where he was trying to go before he landed on my beach. He told me a bit about the country he was headed to, then asked me to tell him where I thought it was. When he mentioned fireworks and paper being invented there, I knew he was talking about China and told him so. He said that was correct and promised me a souvenir via mail after he arrived. He then left me with a pun.

Speaking of which, it’s time I leave you all today as well! I need to get my rest, after all. Big things are coming to Crawford! I had to step up as Mayor on the fourth day. Not to mention that big fishing tournament coming up…