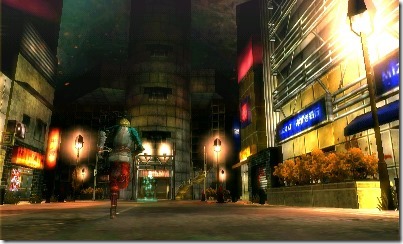 Shin Megami Tensei IV won’t come out until May 23 in Japan and July 16 in North America, but we got an early glimpse of the game. Atlus showed Siliconera an English build and I got to play Shin Megami Tensei IV from the very beginning, where the protagonist is floating in vortex.

If you have the 3D slider on, the hero hovers above the swirling blue background, but doesn’t pop out of the screen. That said, Atlus poured on the 3D effects with a flying logo, and even the health & safety warning pops out of the screen (it’s written on a scroll). A booming voice tells you the choices you make will effect not just you and asks for your name. By default, the protagonist’s name is Flynn so I went with that.

The vortex sucks Flynn, and he awakens in a city covered in flames. The scene is reminiscent of other Shin Megami Tensei titles and another voice instructs Flynn to run over. You can explore the city, but there isn’t anything to see other than burning cars and a glowing white presence ahead. The figure talks about fighting and then says that, now that Flynn has arrived, he can take form. 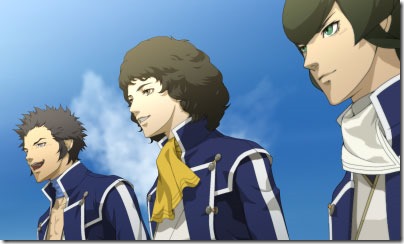 The presence turned out to be Walter, one of the samurai in Shin Megami Tensei IV. After conversing with Walter, Flynn is whisked away to a desert-like area. A stone head and another glowing entity lie ahead. A gentle voice says, “Good, now I can take shape, too. I prayed and waited longing for the day you would come.” This character is Jonathan, who has the opposite vibe of Walter. “The two of us are going to make a world where the peace we know today lasts forever.”

As indicated by the game’s box art, the contrast between black and white is a prominent theme in Shin Megami Tensei IV. Good and evil. Jonathan and Walter, perhaps? 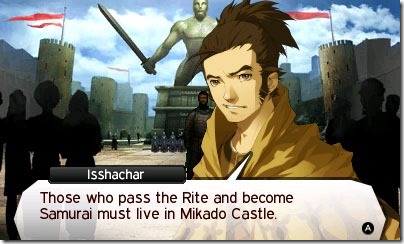 Another figure then comes into view—a fuzzy image of a girl. This character, simply called “Girl,” asks Flynn to revive her. The image looks like a deteriorated oil painting and with that, Flynn is back in the Eastern Kingdom of Mikado. Isshachar greets Flynn and talks about the Gauntlet Rite. People that graduate from the ceremony become full fledged samurai.

Shin Megami Tensei IV has event scenes similar to Fire Emblem: Awakening or Shin Megami Tensei: Strange Journey with character portraits on top of text. Atlus added zooming effects, so sometimes Issachar’s face will fly towards the player and other times the game will zoom out to show Isshachar again.

Players can explore the Eastern Kingdom of Mikado through menus similar to Devil Survivor or Etrian Odyssey. Residents in Mikado are split into two classes—the Luxuror and Casualry, essentially the haves and have-nots. You can visit the Casualry residences or head straight to Aquila Plaza to begin the Gauntlet Rite. Eager to become a samurai (and venture into dungeons), I went straight to Aquila Plaza. When Isshachar and Flynn arrive, another person is going through the ceremony. He fails to become a samurai and complains that the rite is just for show anyway. Isshachar says farewell, but tells Flynn they will always be friends. 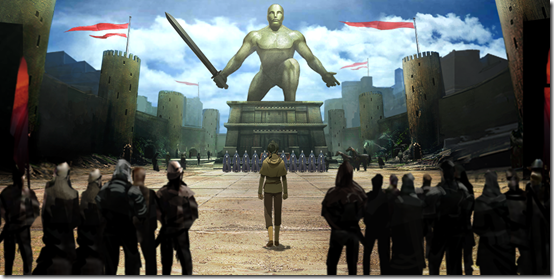 The camera then switches to a first-person view as Flynn walks towards Hope. The 3D effects are strong as the camera rotates showing the stone statue and then pans on the masked crowd.

Now, Flynn has a choice to extend his arm out to see if the Gauntlet accepts him or to not do so. Curious to see if the game would end if Flynn decided not to partake in the Gauntlet Rite, I chose to not extend. That just ticked off the ceremony head who forcefully grabbed Flynn’s arm and put the Gauntlet on. At that moment, Flynn became a Samurai.

I fast-forwarded to the first dungeon, Naraku the Hall of Flame. Shin Megami Tensei IV has 3D dungeons similar to Nocturne. The L and R shoulder buttons control the camera and you use the analog stick to move around. Dungeons have objects to interact with, like points Flynn can jump from and tunnels to crawl under. These have contextual controls like pressing up to leap and down to crawl. 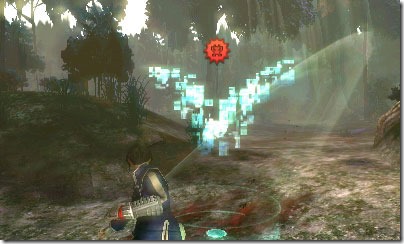 Enemies in Shin Megami Tensei IV appear on-screen just like the Persona games. If you press Y, you can swing your sword and strike demons before a battle begins. Similar to Persona 4, the sword tip has to hit the cuboid demon figure, otherwise the enemy team gets the first strike.

While Shin Megami Tensei IV has some features that make it more welcoming, Atlus did not dial down the difficulty. Regular enemies in the first dungeon can annihilate your party if they exploit weaknesses. The press turn system rewards ally demons and enemies with an extra attack if they hit you with a weak point. New for Shin Megami Tensei IV is a “smirk,” a buff you get after exploiting weaknesses a couple of times in a row. A smirking demon gives that demon a guaranteed critical hit on their next turn, which means they also get an extra press turn, too. Furthermore, monsters in the first dungeon like the Griffon can attack twice, and you don’t start out with a healing spell either. 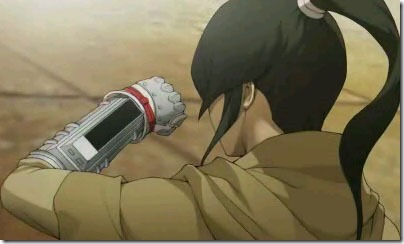 Flynn can learn new skills through the Whisper system. When demons level up, they can pass skills down to Flynn. You can pick and choose skills like Bufu and Dia if you can add Napaea the nymph in your party. You have to negotiate to get demons to join your party in Shin Megami Tensei IV and each conversation has three options. When I asked if the Griffon would join my team, he asked Flynn to extend his arm and also had a joke choice. I agreed to do so and the Griffon asked if Flynn was scared to die. I passed this question, too, but I had to give the Griffon macca (money) and then a life stone (healing item)… and then more macca.

Griffon still didn’t join, but he gave me a life stone back. Other times negotiations are even less successful, because if you pick the wrong choices, the entire team of enemy demons will attack without mercy. The good news is that if you talk to a demon that you already have in your party, you can end a fight right there and possibly get an item as a gift.

There’s another way to avoid fights in Shin Megami Tensei IV—you can simply run away from demons. Flynn doesn’t have much trouble outrunning demons on the field, at least in the first dungeon. I figured out weaving from side to side really throws demons off. In the first dungeon, I also discovered a tunnel and crawled underneath a space to find a relic called “Deep Green Moss,” which could be sold back in town. Mikado has barracks you can rest at and recover your party for free, a blacksmith that sells weapons, and an expensive item shop. 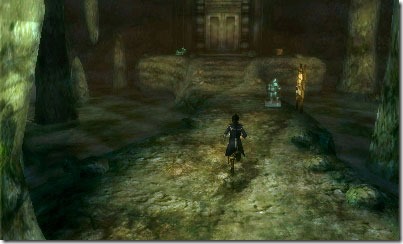 I used my football running skills to get to the boss, which is shown on screen as a pink entity. In battle, that turned into the Disaster Horde, an army of reaper-like figures. My team was Flynn with Bufu (ice) and Needle Shot (gun attack), Centaur with Life Drain, Fuxi (a creature from Chinese mythology) with Zan (force), and Napaea who had Dia (healing magic). I tried using elemental spells first until I found one that the Disaster Horde was weak against and kept using that.

While I managed to have one demon smirk, Disaster Horde killed Napaea, my only healer, in one hit. Ouch. Without any Revival Beads, I had to carefully choose my next moves and rely on the small stock of medicine in my inventory. Needle Shot did more damage so I used that, which has a 3D blood splattering effect. Spell effects are more prominent in Shin Megami Tensei IV. Zan wraps an enemy in a tornado and Bufu freezes the screen. With a little luck, I defeated Disaster Horde and obtained an item that proved Flynn was worthy of being a samurai.

Jonathan and Walter were also vying for the same item, but Flynn got there first. I ran back to Mikado and Hope congratulated Flynn on retrieving the item. One quest complete, but that’s just the beginning of Shin Megami Tensei IV.