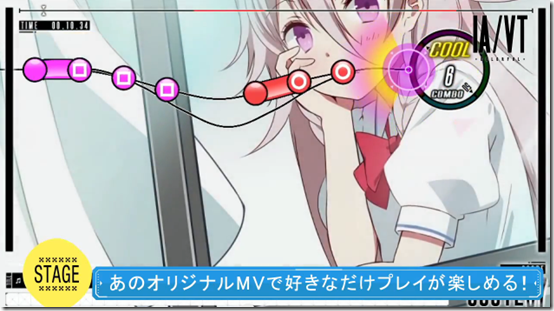 Senran Kagura producer Kenichiro Takaki has been busy with his main series and the recently introduced Valkyrie Drive, but he’s also working on the upcoming Vocaloid title, IA/VT Colorful. The game’s latest trailer shows us its new looks.

As previously reported, IA/VT Colorful was originally supposed to release last year, but after some delays it was announced that the game saw a reboot. The trailer starts out with a look at some clips showing various tracks and stages.

IA/VT features original music videos that you’ll see in the background of the rhythm game. There are three modes of Free Play mode for playing the songs of your choice, a Step Up mode for higher challenges, and Daily Play mode for unlocking new songs.

As for the tracks, they will feature songs from IA’s various albums of IA, IA/01 –Birth-, IA/02 –Color- and IA/03 –Vision-. There are also a bunch of costumes to dress up IA with throughout the game.

IA/VT Colorful will release in Japan on June 25, 2015 for PlayStation Vita.