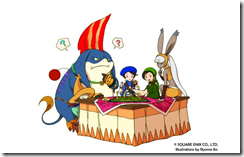 Square Enix plans on getting some announcements out of the way before the video game circus kicks off in two weeks. “Looks like there will be some announcements about DLG before E3. Can’t wait,” the SquareEnixDLG account tweeted.

Interestingly, Famitsu has two WiiWare games from Square Enix in this week’s issue. Kumanage: The Blue Jewels Hated By Kiina Battle Version and Kumanage: The Red Candy Piina Likes Puzzle Version are in the table of contents. Unsourced reports from 2ch say each game costs 1,000 Wii Points ($10) and will have additional downloadable content.

Kumanage as in “bear”? That reminds me of those two Tales of Bearsworth Manor games we discovered in April. Perhaps, Square Enix is going to reveal those soon? There’s also that console version of Space Invaders: Infinity Gene that we outed via the OFLC.