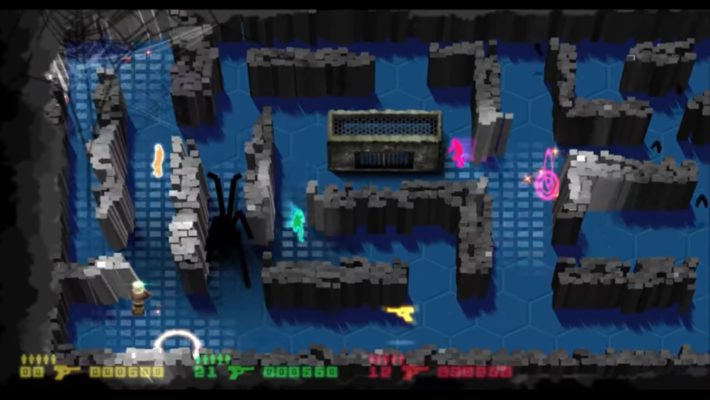 The Intellivision Amico Night Stalker remake has been revealed. Other Ocean Interactive CCO Mike Mika is programming the updated version of the shooter, with Digital Eclipse and Other Ocean handling its development. While it will retain many of the same properties as the original 1982 Intellivision game, this version will add cooperative and competitive multiplayer for up to four people. It will be released on October 10, 2020.

In both the original and remake of Nightstalker, a player is trapped in a labyrinth and hunted by robots. (Spiders also lurk in one corner of the map, while bats occasionally fly about.) You start out in a bunker and must find guns to defeat the robots and survive, though eventually you will run out of bullets and have to find a new weapon to keep playing.

The initial video only shows the cooperative multiplayer option for the Intellivision Amico Night Stalker release. For the first half of the video, the three players are in the original map. Then, for the second half, they are transported to a new map with blob-like enemies and robots. (The original game only had one map and different variations of robots as enemies.)

Night Stalker will appear on the Intellivision Amico on October 10, 2020.