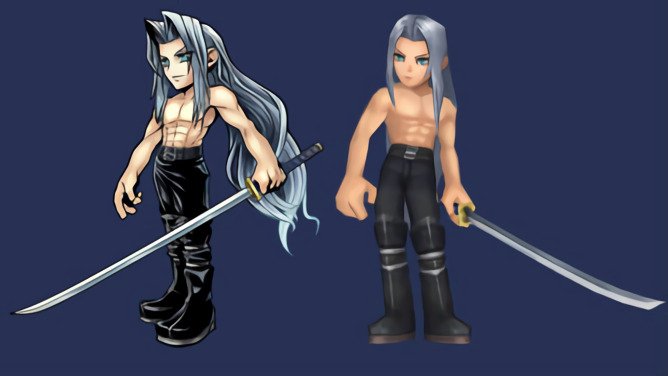 If people want Sephiroth to strip in Dissidia Final Fantasy: Opera Omnia, it will cost them. As part of a pack released in conjunction with the Level 70 Crystal Awakening for Auron, Eiko, Jecht, Layle, Maria, and Sephiroth, a Limited Time Wardrobe Chest (no pun intended, but appreciated) with a shirtless Sephiroth Extra Costume has been released. It costs $36.99.

The Sephiroth Limited Time Wardrobe Chest will be available until February 21, 2020, so Sephiroth will be taking his shirt off over Valentine’s Day. In addition to the costume, you get 9,000 diamonds (4,500 are a free bonus).

The shirtless Sephiroth costume is one of the cosmetic Extra Costumes. It is modeled after his Final Fantasy VII final boss battle appearance and has him taking his top off. Unlike Mario’s Super Mario Odyssey swimsuit costume, Sephiroth’s official Extra Costume art and character model does not have nipples.

In addition to Sephiroth taking his shirt off, a Dissidia Final Fantasy: Opera Omnia second anniversary celebration is in effect. Until March 2, 2020, extra login bonuses are being doled out, special daily missions and a token exchange are appearing, normal daily missions are giving out three times as many rewards, artifact tokens and cycle quest rewards are doubled, there are extra daily missions giving out more rewards, and more Anniversary Chocobo Panel Missions are available.

Ten free 10-pull multidraws will be doled out on new banners over the coming weeks. The co-op first meet rewards will allow people to earn up to 4,000 gems again too. At the moment, people can take part in one free ten-pull on both the Eiko and Sephiroth banner and the Auron and Maria banner.

Extra Costumes aren’t uncommon in Dissidia Final Fantasy: Opera Omnia, and this tends to be the standard price for them. For example, when Zack Fair received his Awakening, he got a new look.