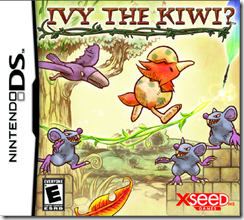 Xseed is releasing two games this month. Ys Seven for PSP and Ivy the Kiwi? for Wii and Nintendo DS.

While Ivy the Kiwi? came out on Windows Mobile phones first, it was originally made for Wii. “To tell you the truth, we actually created the Wii version first. At the end of the Wii development we started the Nintendo DS version. In the middle of the DS version, we started development of the Windows phone version,” Yuji Naka, CEO of Prope, revealed in an interview with Siliconera.