Sure we’ve seen games starring thieves before, but there’s nothing like Kaitou Rousseau (Phantom Thief Rousseau) for the Nintendo DS. Like Lupin the Third he’s a master of disguise, but young Rousseau is just an elementary school student! At school he’s just an ordinary kid who has a crush on his classmate Seine. When Seine gets kidnapped it is his chance to don disguises and rescue her. Can you guide Rousseau through a comic book style adventure where you draw disguises with the touch screen? 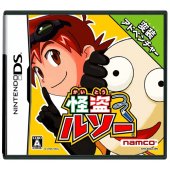 Kaitou Rousseau is a touch screen adventure game skillfully blended into a comic book set up. The entire tale of the game is told through panels where Rousseau (or Rusou as the kids call him), Seine and everyone else chat with pop up bubbles. On the bottom screen you can poke other characters like his classmates Shibun and Pochi to talk to them or tap on items to inspect them. After you are done with a screen it rolls up from the touch screen to the static top screen, just like if you flipped a page in a book. The top screen also serves as reference, which comes in handy when you need a quick clue.

The first mission Rousseau has is to track down Seine and rescue her. To do this he’s going to have to use his cunning disguise skill. Before he can change into anything Rousseau needs to take pictures of people, animals and random objects. Each picture snapped adds an extra disguise to his arsenal. If Rousseau needs to transform all the player has to do is tap on the pink icon on the top right hand corner of the DS screen. Once you do this you can select a face to draw or “freeform” where you can draw any face you want. After you pick which face you want to use as your disguise, the bottom screen switches into a grid. Using the top screen as a reference it’s the player’s job to recreate the face to the best of their ability. By using the two brushes (one fine and one thick) you’ll draw the eyes, nose, hair and whatever other features to make a mask that can fool someone. After you draw the mask you’re graded on how close you are to the original based on the grid. If the mask is drawn right you won’t arouse any suspicion, but if it’s quickly scribbled it out or if you select the wrong mask you will raise a red flag. If the suspicion level runs too high it could be game over for Rousseau. While most masks are other people’s faces Rousseau can disguise himself as objects like a nearby window. Watching security guards pass right by Rousseau when he’s disguised as a window or a statue is amusing.

During boss fights Rousseau’s disguise skill still comes in handy, but he may have to use nearby items too. When Rousseau meets a face checking robot the proper mask only distracts the robot. To defeat it he needs to pick up a nearby mallet to smash the robot to bits. Other times Rousseau needs to pay attention to his surroundings to perform a daring escape or to gather information. By asking the right questions and searching for key items you will be able to progress through the story.

It’s no surprise that the story is one of the best parts of Kaitou Rousseau. The game has the goofiness of Lupin the III and the  elementary school dynamic of Case Closed (Detective Conan). The three episodes of the game takes Rousseau through the first episode where you rescue Seine and later confront his grandfather the mysterious man of a million faces, Million Mask. Like Phoenix Wright, Kaitou Rousseau has a memorable cast of side characters like the skinny skeleton like Gessori and the mysterious Vanishing Casey. The only problem with the story is that there is only one path. It’s a one trick pony in this department, even if it is entertaining. After you complete the game you will unlock a disguise trial where phantom thief Rousseau has to race against the clock while drawing disguises.

Fans of SCUMM games and the new wave of adventure titles will dig what Kaitou Rousseau has to offer. Drawing disguises with the DS’ touch screen is surprisingly fun and the story is well done. Unfortunately, the game is on the short side, after seven to eight hours the game is over. While all good things have to come to an end it is a shame that there isn’t more beyond the three episodes.

Since Kaitou Rousseau is primarily a text based game, it is going to be challenging to play through the game without any knowledge of Japanese. On the plus side the game does have furigana to help players who can read kana out.

While nothing has been announced about a North American release, the success of Phoenix Wright, Trauma Center and other graphic adventure games makes it seem likely that someone will pick up this game for localization.

– Cons: While the story is enjoyable, most people won’t give this game a second look after completing it.

Overall: Kaitou Rousseau is an ingenious game that only the DS can pull off. While it’s clever and downright entertaining, it falls short in the replay value department due to the game’s linear structure.