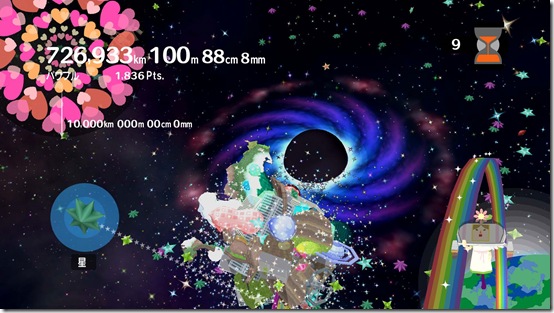 The Japanese title, Katamari Tribute, is a more fitting name since this game is mostly a pretty rehash of past Katamari games. But, even if Namco Bandai made every map from scratch would Katamari Forever be that different from all of the other Katamari titles?

Graphically, yes. Katamari Forever has a set of sharp visual filters that render the world with cel-shading or a touch of wood grain. The levels from past games, which take place in the King of All Cosmos’ mind, start out in black and white too. As you roll up paper clips and people, the world gains color and the King’s memory comes back. 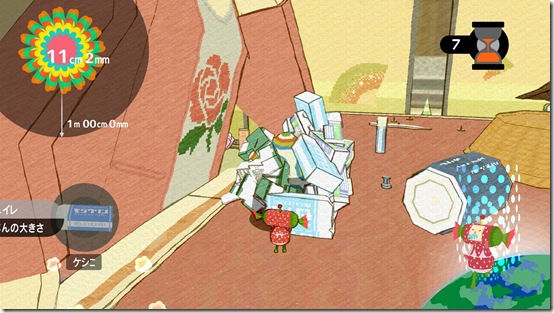 Old levels like the Gingerbread stage from We Love Katamari have hearts to grab. Pick one of these up and your katamari temporarily becomes a junk magnet while the Prince’s cousins dance on screen. Another tweak allows the Prince to hop by flicking the controller (sounds like a good idea, but doesn’t work well in practice) or with the R2 button. Jumping changes the past levels a bit, mostly by making them easier since stairs aren’t an obstacle anymore.

Otherwise, Katamari Forever follows the same formula and goals as the other Katamari games. Maybe, a little too closely. You collect junk with a small-to-giant sticky ball by directing it with two analog sticks. Many of Katamari Forever’s memorable challenges such as the level where you roll up food to grab a sumo wrestler are from other games. The game’s most innovative stage has players soak a katamari with water and roll over a desert to vegetate it. Seeing the barren land turn into a lush garden is a sweet sight. This level also introduces a new gameplay mechanic, rolling into puddles to refill a katamari’s water supply. 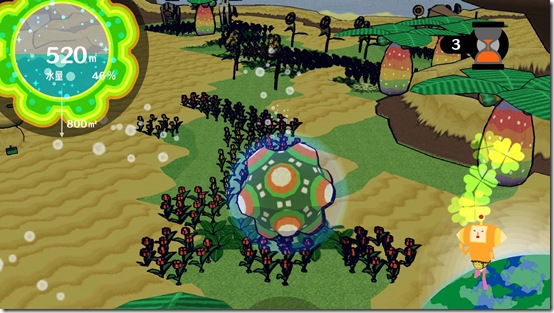 But, that’s only one level in a game with around thirty stages.

Here are three quick ideas I came up with.

Katamari Bullet Hell – Imagine a shmup where you can bend time (for a short while, in rechargeable bursts), roll up bullets into a katamari, and throw them back. On second thought, this will never sell.

Retro Katamari – Namco Bandai sort of did this with Me & My Katamari, but it would be neat to see an 8-bit style Katamari / platformer hybrid.

Run! It’s a Katamari – Katamari Forever doesn’t have online multiplayer, even though its Xbox 360 predecessor Beautiful Katamari does. Bummer, but Beautiful Katamari’s online mode is the from We Love Katamari. Perhaps, Namco Bandai can innovate here with a new game that has one player rolling a katamari while three (maybe more?) other players try to escape a sticky situation. Players that get caught would respawn and the game would keep going until time runs out. Namco Bandai could add options that change the katamari starting size so large players can block the katamari from growing and the type of runner (people, Mogran, unicorns, etc.).