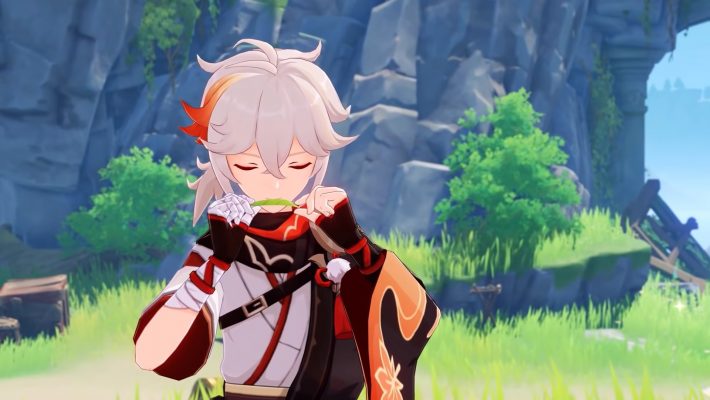 There’s yet another Genshin Impact video from miHoYo focused on Kazuha, and this one is focused on his moveset. The next Collected Miscellany video is here. As usual, this is part of the series where Dainsleif, aka Yuri Lowenthal, talks about the new character while showing off gameplay and his skills.

Kazuha is an Anemo character who wields a sword, just like the default Traveler or Jean. His normal attack can chain into a five-hit combo. It also has a plunging attack that can change and inflict Anemo AOE if you use the Chihayaburu Elemental Skill before performing it. His passive allows you to run for longer periods, as it cuts back on how much stamina a dash will cost.

As for Kazuha’s Elemental abilities, both involve AOE attacks and controlling the area. Chihayaburu gathers enemies together to deal Anemo AOE damage. Kazuha can launch in the air when he does this and then perform a special plunging normal attack called Midare Ranzan. His Elemental Burst is Kazuha Slash, which does Anemo AOE and creates a small tornado that can trigger a swirl elemental reaction.

Genshin Impact is available on the PS4, PS5, PC, and mobile devices. It will also come to the Nintendo Switch. The Kazuha banner Leaves in the Wind will run until July 20, 2021.