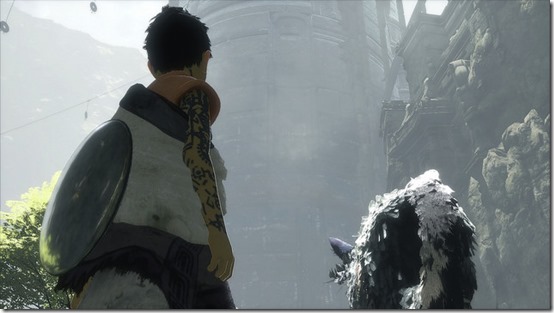 Much ado is made about how wonderfully detailed Trico, the towering creature in The Last Guardian is. For good reason. After all, this is an entirely new animal that behaves as though it is an actual, living being. He’s something of a triumph. But, as I went through The Last Guardian, I couldn’t help but be struck by the child as well. This young man may be entirely controlled by us and a reflection of our behaviors, but he also has a number of mannerisms and actions that show what an individual he is.

The way he speaks to Trico is a high point. This is a young man who has been taught from a very early age to fear these beasts. While there is that sort of hesitation early in the game, he quickly overcomes it and begins speaking him like we would a dog. The tones when he’s speaking his language to entice, coerce, and calm Trico are simple and sound almost like baby talk. The frustration in the early moments, when he’s attempting to get Trico to turn back, not follow, and leave him alone, takes that exact tone children nail when trying to act like they’re mature and must be obeyed.

It’s what he doesn’t say that really sells him as a convincing character. The Last Guardian’s boys actions speak louder than his words. When he gets antsy, attempting to get Trico to do something, he dances in place. I liked to pretend he was saying, “Trico. Trico? Trico! Trico!!” His tone getting more intense as his little dance continued. When he lifts anything, it looks as though what he’s carrying is the heaviest thing ever. There’s a clumsiness to his behavior that shows he isn’t adept at any of the things he’s being forced to do at the moment. 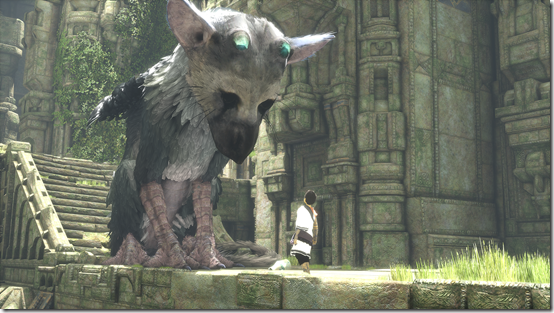 When shimmying along ledges, leaping to great heights, or basically doing anything where he’d be in danger, I’d fear for this little kid. I was convinced there was a very real chance he couldn’t do things, because even though I knew I was capable of getting him through this, his mannerisms suggested otherwise. That his only recourse when fighting is to help by climbing on enemies’ backs or ripping off their helmets further shows this, as they seem like last resorts actions for someone who has no idea what they’re doing.

The Last Guardian’s controls help maintain this illusion of perhaps not being entirely in control. In games like Final Fantasy XV, we have complete and utter control over every action. Shooters, like Metroid, rely on their precision. Here, there can be times when you’ll fumble, because things aren’t as perfect or exact as you’d expect. Triangle as jump still gets me every time. Sometimes, when I’d grab for a barrel with circle, I’d feel like I was in the right spot to get it. But no, I needed to reposition. Even performing some simple actions, where it should be as easy as pressing a button to grab and holding down to perform it, requires holding it because the boy needs that extra strength.

This comes through best when the boy is trying to escape enemies. When he’s caught, you have to button mash your way to freedom. The Last Guardian doesn’t tell you what the prompts are. The images appear on-screen. You need to flail, just as the boy does, to free him. Tapping action and directional buttons does it, but there’s sense of panic it evokes, the sort you’d feel if you were a helpless child in that moment. 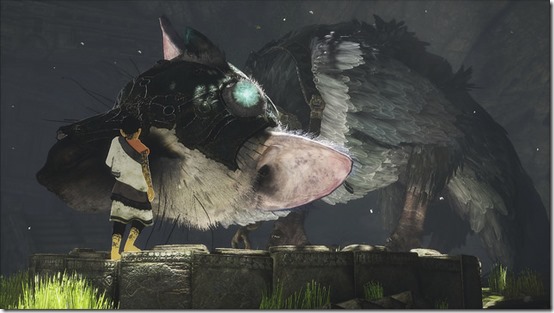 Then, there’s the dress-up. While The Last Guardian is a game you can play once and get a full story, there’s some incentive to coming back. Doing so and collecting certain number of barrels for your buddy will unlock extra outfits for the boy to wear. Now, I don’t want to spoil anything for anybody, so let’s say they’re an appreciated extra, especially when they reference other characters we’ve loved.

In The Last Guardian, we spend our entire time focused on Trico and the boy. In each case, the characterization is spot on. One is absolutely an accurate representation of an animal that’s slowly, but surely, coming to love someone he recognizes as a possible master. The other is a young man that’s completely clumsy and unprepared for the role he’s playing. The controls, mannerisms, and personality of this kid is a wonderful recreation of an actual boy. He’s believable, which is good, because you’re going to spend a lot of time with him.

The Last Guardian is available for the PlayStation 4.