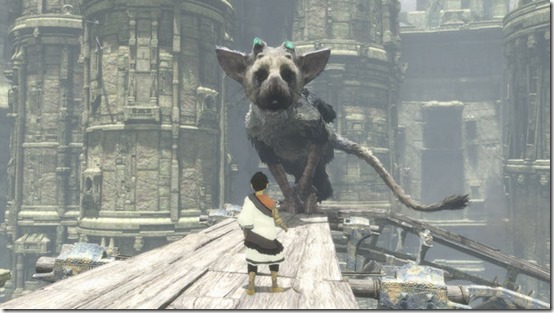 There are games where you’ll see characters, situations, and spaces that look lifelike. Things will seem so real. But, a caveat may arise. They may look right, but the mannerisms will be all wrong. There’s some flaw that keeps you from connecting. The Last Guardian works well, because Trico feels alive. Anyone who has ever owned or interacted with an animal will see these familiar behaviors and mannerisms. It’s more than a companion we’re escorting and using to get around. Trico seems like a beloved “pet.”

One of the first things you may notice is that Trico can act as a hint system. When you’re finding your footing in The Last Guardian, there are many times when it might not be clear where to go or what to do. Call me an idiot if you’d like, but I couldn’t find the area that needed to be destroyed to escape the first cave initially. I was systematically searching the ruin where the boy’d acquired the shield and only backtracked when I saw Trico heading there. My new friend was the one who started pawing at the proper place, helping me get where I needed to be.

It felt like these moments happened less and less in The Last Guardian, but I don’t think it was due to Trico getting less adept. I think it was because I was getting more comfortable and accustomed to the situations. After the three hour mark, it only seemed like my precious baby was only stepping up for an assist when some sort of platforming or Trico positioning mishap led to the boy not reaching the right heights. Triangle as the jump button is one of my least favorite control decisions in a game. (Making B accept, ala Langrisser Re:Incarnation –Tensei, is my absolute least favorite thing. Just in case you were curious.) 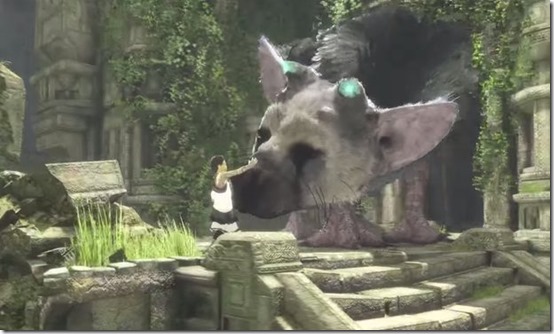 Speaking of those missteps. Trico behaving like an actual animal means that sometimes, he’s going to have a will of his own. There will be very many moments when you need him to be just a few inches to the left or right. He might walk away and lie down. I found myself talking aloud to Trico, even though he couldn’t hear, begging him to do, or not do, something. You do have commands you can use. R1 calls him. Holding R1 and a direction can be used to try and get him to a certain space. Stand up is R1 and circle, while sit is R1 and cross. He’ll hit something or attack something if you press R1 and either square or triangle. But, at least early on, these responses aren’t always guaranteed. But early on, holding on to a spare barrel for as long as possible as you’re waiting for that bond to form might be the best way to keep him on track.

Might is the operative word. Why? Well, it isn’t that barrels of his food are ineffective. On the contrary. It did seem like we were bonding in The Last Guardian, thanks to those little treats. It’s because Trico would get a little too smart. There were times when I’d have a barrel, be in a somewhat small space with my buddy, and then find he’d smacked it out of my hand! The first time it happened, I was more impressed than upset. This is the same sort of behavior my friend’s Irish Setter used to display when you’d try to use a treat as a bribe for a trick. She’d act like she was going to give paw, knock it out of your hand, and innocently smirk at you when it was gone. Trico has that act down pat.

His cries for affection are very doglike as well. Sometimes, he’ll turn his head at you just so. His eyes will be green in most situations. But, if I had a treat, his ears would go forward, he’d perk up, and his eyes would be a bright white to show his interest. If I happened to throw the barrel the wrong way, they’d turn to yellow, showing he wasn’t following the boy. If I was sitting doing nothing, fighting with the camera to get a good view, I’d find a green-eyed friend nudging me and hoping for pets. The Last Guardian has a pet button, by the way, and that’s great. 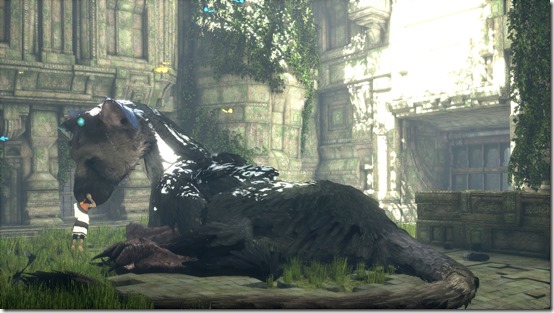 Though, as much of a puppy as Trico can be, I think this creature reminds me more of a cat. Specifically, two my family had owned over the years. One was a stray before we’d been able to take her in. I heard her meowing at the back patio, near a glass door, and went to try and feed and catch her. An opossum showed up, walking in the backyard. She moved to be between the critter and me, despite my being inside, and started hissing. Trico has that same aggressive stance when the soldiers come after the boy. This outdoor cat had this vicious double slap and pounce she’d use against opponents, movements which Trico mimics perfectly. Trico’s eyes also are a muted red or purple when mad, so keep that in mind when watching for his emotion.

The calming method is the same as well. Another cat I’ve known is the most docile thing. You can grab his tail or paws and hold them, and he’ll do nothing. Once Trico likes you, you can sometimes get away with the same thing. It’s possible to grab his tail for no reason, with circle, and hold the left analog stick to pull. (Not too hard or often, of course.) You can pet his feet, and he’s sometimes fine with it. You’ll climb his tail, and he seems to encourage it.

When playing The Last Guardian, Trico feels alive. It has all the mannerisms of a dog or cat down pat. You can look over and suddenly see him hunkering down for a nap. He can get distracted by something he finds important, forcing you to eliminate the annoyance to get him back on track. It feels like he’s alive, which is part of what makes this game so special.

The Last Guardian is available for the PlayStation 4.