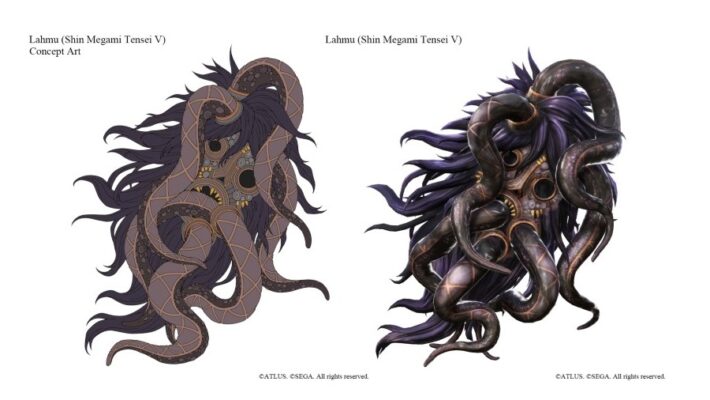 There’s new Shin Megami Tensei V demon commentary from Character Designer Masayuki Doi. However, this time it isn’t just explaining the history and design decisions behind Lahmu. The latest statement also went over how SMT V art goes from a concept image to a 3D model.

We originally weren’t planning to color Lahmu’s artwork for promotional use, so we actually don’t have a finished artwork to show like the other demons. As such, we were originally going to show only the retouched artwork, but I thought this might be a good opportunity to talk a bit about the behind-the-scenes process—from design to modeling—and got special permission to also include the design file used during development. Although this is only a brief rundown, I hope those who are interested in these types of topics will continue reading.

Firstly, all the demons who appear in-game are taken from various sources, where we imagine what they could look like, and begin conceptualizing their created designs. Lahmu is a god from Babylonian mythology, and is often depicted either as a large serpent, or as a male deity with six curls on his head. But his true essence is said to be a river spirit, created from the mud formed after the freshwater and seawater from the Persian Gulf mixed with one another.

We therefore represented the idea of river currents through his tentacles, and highlighted the mud element by establishing his core design as “a mask created from mud, with tentacles growing underneath.” The fact that he has 6 tentacles with lots of hair growing beneath the mask is an allusion to his mythological depiction.

Once these rough design illustrations are created, the 3D modeler begins the process of creating a model. For parts of the design not shown in the roughs, we usually provide some extra perspectives as reference, but we actually often finalize granular structural details and surface designs as we model the characters. What’s also interesting is that, while modeling, we would often try to implement the model in an actual build to check how it looks, but because we used the Unreal Engine for the game, we were able to shorten that process considerably. A little while ago, the process behind displaying 3D models in a build was laborious, and required converting data in specific output formats which took a very long time, so I’m constantly astonished by how far technology has evolved.

Once the 3D model is complete, the asset gets used by our animation, effects, and event-planning teams, but for marketing, we simply retouch the pre-rendered images to use as finished artwork.

What do you think? If you look at this retouched artwork, I think you can get a feel for how accurately the 3D models are recreated based off of original illustrations and how utilizing them can lead to artwork of even higher quality than illustrations. During the game, animation will be added into this to bring the characters even further to life, so I hope you look forward to that too!

And here are the two images showing off Lahmu. 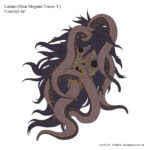 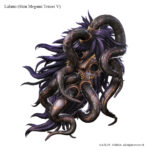