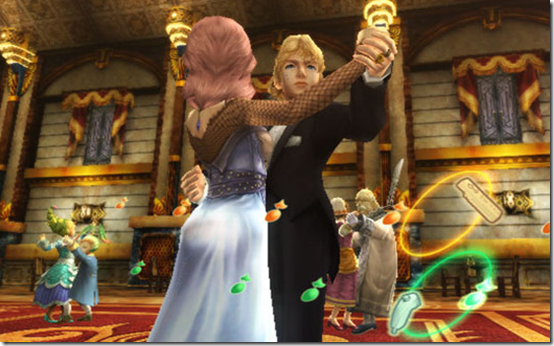 In between battles with bombs and tossing townsfolk by bending gravity, Final Fantasy Crystal Chronicles: The Crystal Bearers has playable events. One of these is a dancing mini-game where you help Layle tango and waltz by moving the remote and nunchuck.

Famitsu also revealed the “bottom battle” where you help Belle bump a bikini-clad player off a platform with her butt.

There may be additional playable event sequences too. The E3 demo had a scene where Layle attempted to pilot an airship and a mini-game where he shot flying enemies with a chain gun. Speaking of those, I suppose the on-rails chase scene where Layle escaped from Liltys riding chocobos could be considered a playable event. Seems like Square Enix is giving players plenty of breaks from the main game.