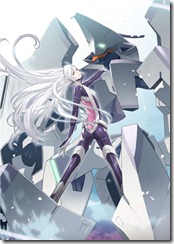 Liberation Maiden, the shooter from Nintendo 3DS game compilation, Guild01, is getting a follow-up on PlayStation 3… as a visual novel.

The new title is called Liberation Maiden Sin and will be published by 5pb, according to this week’s Famitsu magazine.

The main character in Sin goes by the name of Kiyoto Kaido. He recently began his new post as Chairman’s aide to President Shoko Ozora, who was the star of the original Liberation Maiden. He has the special ability to read other people’s thoughts, which will come in handy for the young President.

Famitsu also say that several new female characters will be appearing as cabinet ministers. Grasshopper CEO Goichi Suda who originally contributed to Guild01 with Liberation Maiden will also be writing some of the scenarios of Liberation Maiden Sin.