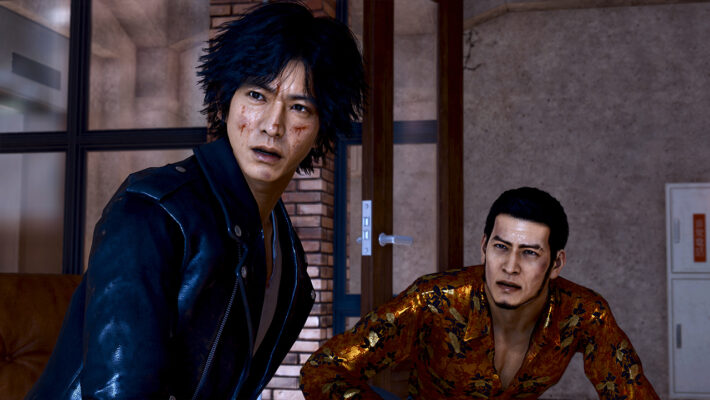 Lost Judgment, developed by Ryu Ga Gotoku Studio and published by Sega, is releasing worldwide on September 21, 2021. In our Lost Judgment interview, we asked localization producer Scott Strichart about how making this game has been different, why you should always select the wrong answer and… gadget dogs?

Graham Russell, Siliconera: How has the simultaneous release for Lost Judgment changed the team’s work? What’s the biggest difference that players might notice?

Scott Strichart, localization producer: Well, the hope is that players won’t notice it! But on our side, it changed everything. We’d never started localizing a Ryu Ga Gotoku Studio game so early, and as a result, we were kind of in the dark about a lot of things we used to be able to just open the game and find out. We had to rely heavily on the dev side to answer our questions instead. From simple things like, “How far apart are they standing in this scene?” to complex essays in response to questions like, “What is this character getting at here?”

The sim ship aspect of this title has been a massive victory, but also a massive learning experience. We turned this whole project around in almost exactly a year, and that’s kind of insane. But now we can have the really valuable conversations about how to do it better, like how to make sure things get the right amount of time. We can even turn to the rest of the Japanese product side of our company to say, look what we did with a game of this scope. Here’s where it went right and wrong. Can you do it too?

The last time we talked, you told us that Like a Dragon voice recording wrapped right before things started locking down due to the pandemic. We’d guess, then, that Lost Judgment’s sessions were very much affected by current conditions! How did that process change? Was there something you wish you could have done differently?

Strichart: Indeed they were. I’m eternally grateful to Keith Arem, the voice director/owner of PCB, our recording studio for the project, who had worked out this incredibly intricate system of recording remotely without compromising on quality or consistency. The video game industry did not stop because a pandemic broke out, it adapted. And that reverberated all the way through to the VO recording aspect as well, for us, and many other publishers.

Our process started with entire rigs consisting of a computer, mic, and a pre-amp being hand-delivered to actors’ living spaces. The recordings happened over video conferences. We’d stop for planes, noisy neighbors, and gardeners, we’d adjust to the latency of an individual actor’s internet and the sound of their walls. Despite these challenges, we’d get it done, and then the rigs would be picked up, sanitized, and delivered to the next actor. It was madness, yet somehow we came out the other side with a recorded video game.

As far as wishing I could have done things differently, ha! The fact that we have it at all is a miracle. 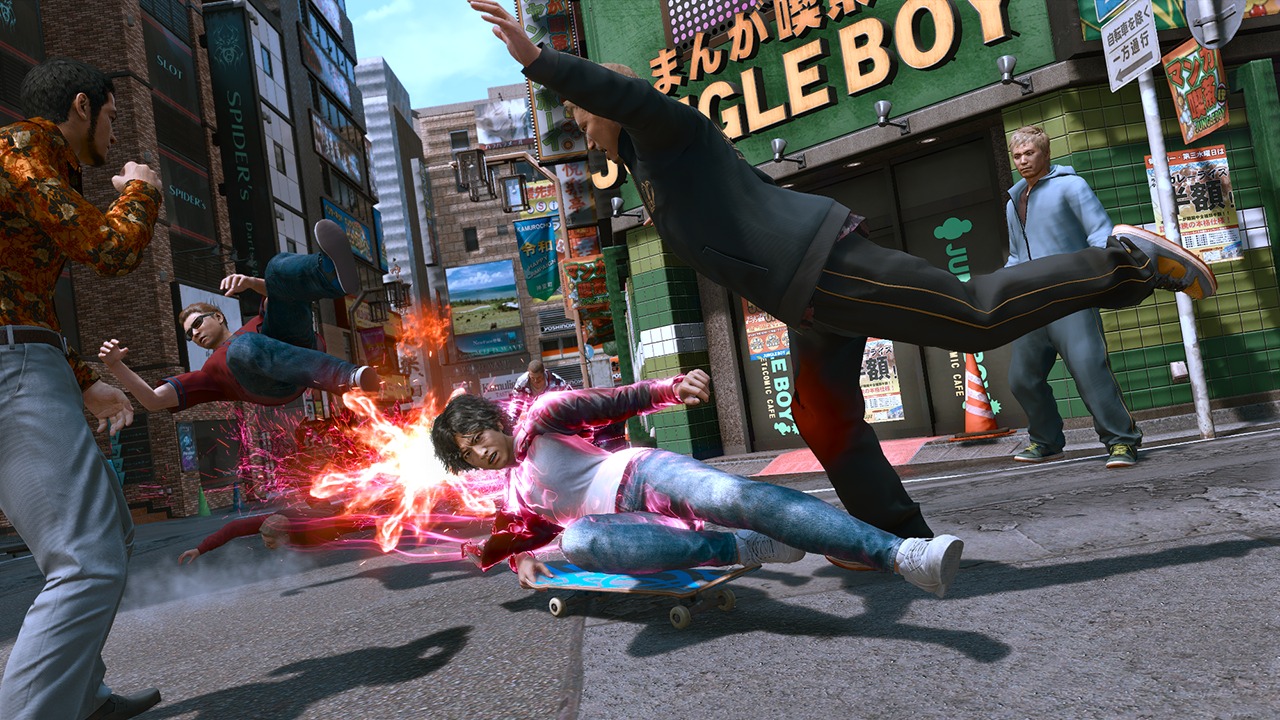 Who comprised your team for this title? Any big changes? Anyone you’d like to shout out for stepping up?

Strichart: Funny story, this wasn’t even supposed to be my project. Another producer was going to handle it and I was just going to backseat drive. Then that producer left to follow a dream. It fell back into my lap, while I also had to handle Yakuza: Like a Dragon’s 9 patches across 5 platforms, oversee its translation into two more languages, and the PS5 version. If it sounds impossible, it was! So Lost Judgment could not have happened without the stellar efforts of my team that I essentially had to trust fall onto, and I thank you for indulging me with this question because it’s a lot of shouting out to do.

Vicky Lee, one of our newer associate producers, literally saved the project during those complex first few months by guiding the localization team and liaising with the dev team. Our lead translator was Jyun Takagi, shored up with support from Shun Fukuda and Mino Iwasaki. On the editing side, Josh Malone, who worked on Like a Dragon and Shinada in the Yakuza remasters, stepped up in a big way to help handle VO. He was supported by Shervin Zadeh, Shaun Gannon, and Stephanie Spoleti, who was also a Like a Dragon vet.

Yagami grew as a person and detective over the course of the first game. How do you feel that’s reflected in the sequel? Do his speech patterns and mannerisms change any as a result?

Strichart: It’s interesting, because the game opens with Yagami having fallen right back into his comfort zone, engaged in another one of Genda’s handout jobs that leads to all kinds of buffoonery. And you get a sense that he’s really in a good place. Then of course the game happens, the darkness creeps in, and once again, Yagami’s sense of justice is challenged from every possible direction. As ever, Yagami adapts to his situation to fight for the truth, because that’s his thing. I wouldn’t say that changes his speech patterns/mannerisms much. Needless to say, please enjoy the first couple of chapters while they last, haha. 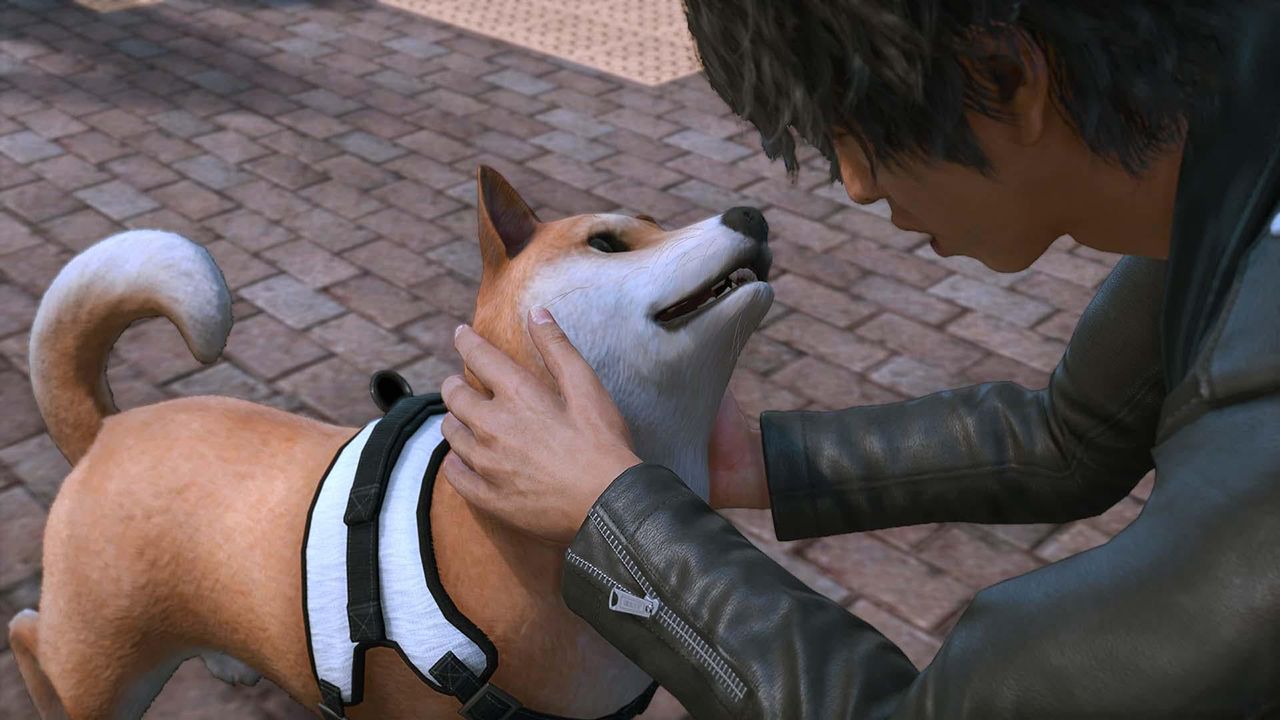 Yagami has a lot of gadgets in this one. Which is your favorite and why? And which is your second-favorite, since of course the first is the dog?

Strichart: Ha! We actually struggled with that a bit, because we were like, “Can you really call the dog a gadget?” But there he is in the gadget wheel, so the answer is yes. Most adorable gadget ever. But anyway, I wouldn’t say I have a favorite. Each gadget — the signal detector, the noise amp, and Tsukumo’s buzz researcher — has a unique functionality. It’s fun to see all the ways you get asked to use them.

Next question! We know your role is localization, but it feels like you’d have some insider insight into the game’s development. So! As Judgment continues its franchise path, how do you think it distinguishes itself from Yakuza? What are its particular strengths? Does its existence allow Yakuza to morph and change by taking on and preserving some of its original qualities?

Strichart: One of the original Judgment’s criticisms was, and I paraphrase, “isn’t this just Yakuza with a thinking man’s protagonist and some lockpicking?” I mean, that kind of ignores a major tonal difference, but it’s a fair point on the surface. Of course, that was before Yakuza, having completed the Kiryu arc, went through a complete transformation of gameplay style, protagonist, and even some major narrative bombs — did you beat the chapter 12 bosses? — that reverberate all the way through Lost Judgment. hich does of course, share a world with it.

So I think it’s safe to say that with each series being at least one game deep and treading water now with their own gameplay style, tone, and dramatis personae vibes, we probably won’t hear that again. Both franchises are developing in ways that are absolutely different and heavily focused on their particular strengths: Yakuza, an over-the-top RPG about the criminal underworld that often culminates in a shirtless battle on top of a tower, and Judgment, a cerebral detective experience exploring and poking holes in modern values with high-octane action. 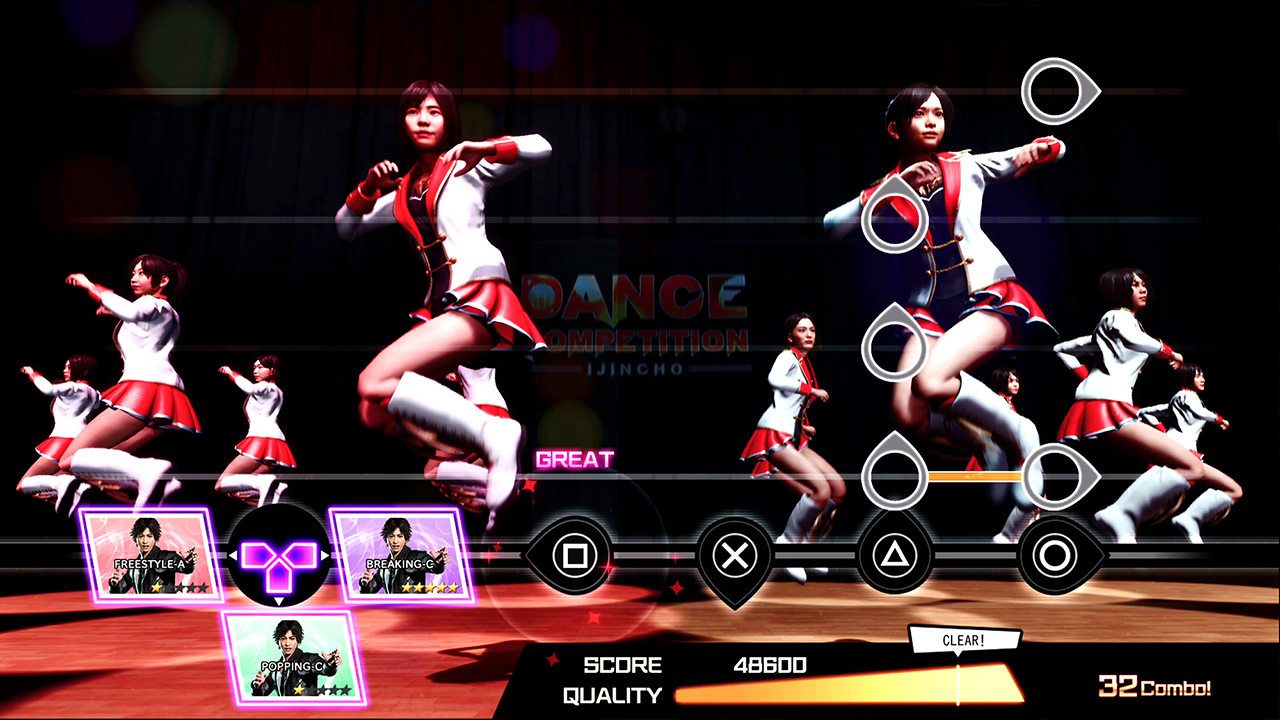 What was the hardest part of Lost Judgment to localize? What took the most care to make it easy for Western players to understand?

Strichart: From a technical standpoint, probably the minigame that returns from Yakuza Kiwami 2 where you have to string a bunch of words together in the correct order to make a functional sentence. And worse, there’s a “hard mode” if you attempt it while drunk. Multiple words have to work in multiple situations, and it’s just… such a localization challenge. There’s also the “chatter posts” in the buzz researcher that use variables for the keywords you’re searching. I could write an essay on why variables make localization teams rip their hair out, so I’ll stop there.

Lost Judgment gives a little love to the Sega Master System, letting you play some games from one of the company’s less-appreciated consoles. What’s your favorite Master System game? Did any localization work go into those?

Strichart: I’m actually quite proud to say no, zero localization went into those. They are presented exactly as they were released in the original states, for better or for worse. You can swap between the North American and Japanese releases of each game and see the differences, the calls that the original localization teams made. Who are we to step in and make changes to that? These aren’t “redux” versions, they’re the originals. If you can’t tell, I’m big on games preservation.

As far as my favorite, I grew up a Nintendo boy; lured in by that sweet ding of Mario’s coins. Working at Sega, I’m discovering so much of what I never got to as a kid, and it’s been an amazing journey. I’m gonna experience those Master System games right along with you. 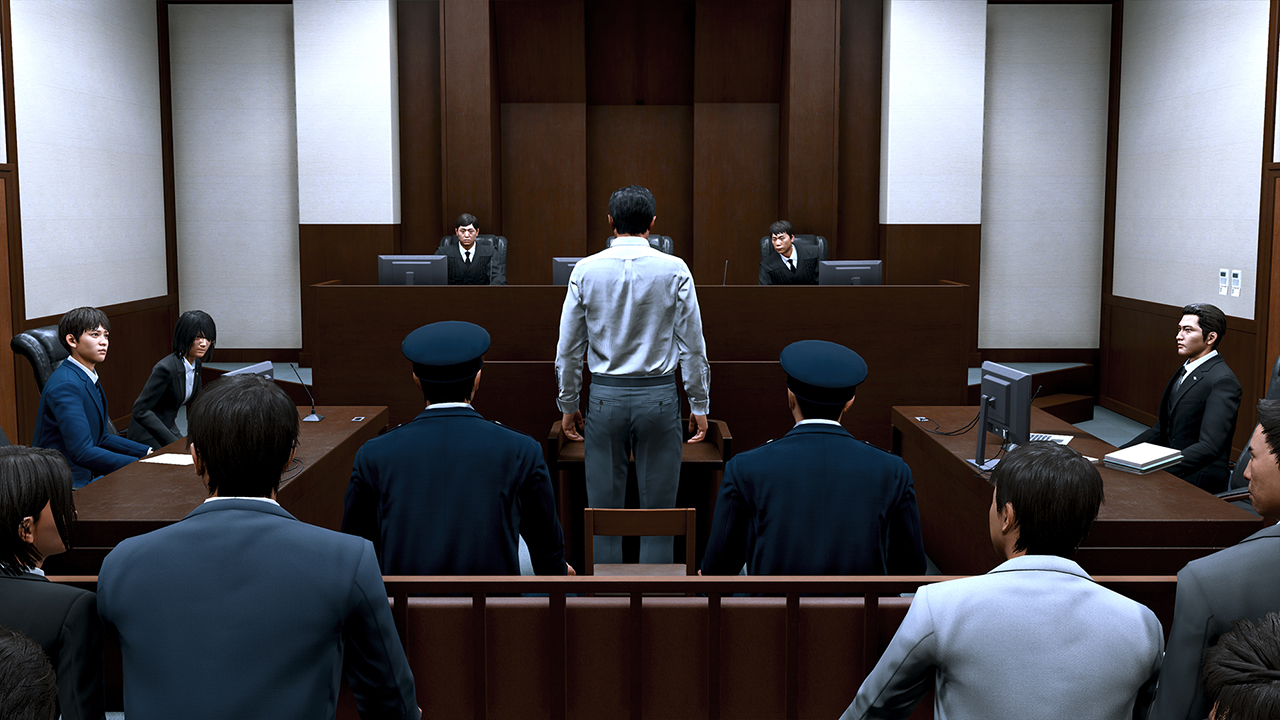 Any particularly silly wordplay in this one that you’d be able to share?

Strichart: Well, Lost Judgment isn’t really the place for a lot of silly wordplay… Courts of law, high school bullies, and dens of thugs just aren’t conducive to it, you know? But it gets pretty fun in its own ways. Always select the wrong answer. You’ll see a completely different side of Yagami when you do, and there’s no real penalty for doing that!

Thanks to Scott for taking the time to talk to us! This Lost Judgment interview has been lightly edited for clarity. Lost Judgment releases September 21, 2021 on Xbox Series X, Xbox One, PlayStation 4 and PlayStation 5. For more on the game, check out the rest of our Lost Judgment coverage.