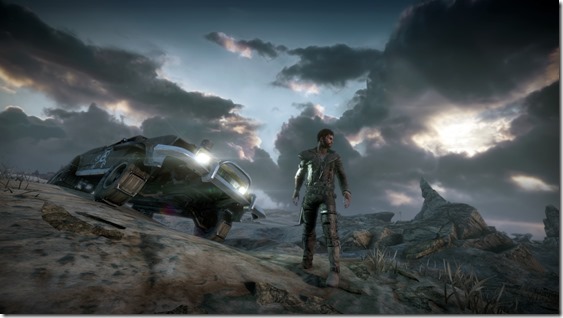 One of the few genuine surprises of this year’s E3 was the announcement of Mad Max. And the funny thing is this: there have been so many games that take place in a Mad Max-esque setting, than an actual Mad Max game seems a bit late to the party. Almost unnecessary.

The game is fairly simple: you play the role of Mad Max, obviously. And the goal is to survive, again obviously. Gameplay is divided into two distinct parts. On foot you’ll go heard to head with other denizens of the desert wasteland that used to be the Australian Outback (though for whatever reason, Max himself does not sport an Aussie; peculiar to say the least), in a desperate struggle over precious resources, such as food, ammo, and fuel.

That last necessity ties directly into the other major half of the game; behind the wheels of the car As Mad Max drives around, he’ll run into various oddballs and flat out scums who terrorize the Outback. Good thing he’s well equipped. 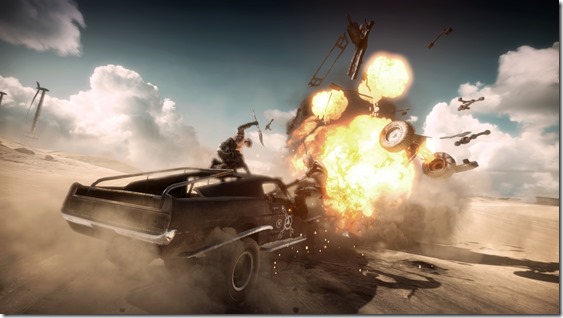 Max’s ride is not the Interceptor, his trademark vehicle from the movies, which has been stolen, and which Max aims to get back (thus setting up the overall plot of the game). Instead, he drives around in the next best thing—a little something called the Magnum Opus, a highly customizable rig that was designed by his “idiot savant sidekick” and mechanic, Chumbucket.

The majority of the demo simply shows Max riding around in the game’s open world, engaging with various hostiles, either by ramming their vehicles or shooting at them point blank. Sometimes Max pulls the trigger, but sometimes it’s Chumbucket, who either rides shotgun or is in the back.

Car combat is vaguely reminiscent of Twisted Metal, but dialed back a couple degrees, to be made less frantic and a tad bit more realistic. It also needs to be noted how flat-out gorgeous this part of the game looked. The game as a whole looks great, but the driving segments is when one could really admire the deep, azure skies, plus inviting yellow sand all around as well. Rarely has a wasteland looked so beautiful.

Once a foe has been subdued, Max and Chumbucket can hit the breaks, exit the Magnum Opus, and forage for scraps. Again, Max’s vehicle is designed to be customizable and it’s the designer’s intention to form “a bond” of sorts between man and vehicle. You’ll apparently be able to get behind the wheel of over 50 authentic Mad Max vehicles, but his best friend will most definitely be the Magnum Opus (until the Interceptor becomes an option, that is).

The wasteland is huge; massive, really. There’s plenty of ground to cover and the Magnum Opus is up to the task, provided that it’s properly equipped to navigate certain terrain. Driving in general looks lots of fun, which is great, since it features so prominently. Though the objective of the demo was for Max to go through a barrier, called The Jaw, which blocked a particular section of the Outback that he wanted passage through.

It’s here that Mad Max decides to get out of his vehicle and deal with foes on the ground. In this particular case, some sniper rifleman that even his ride would not be able to stand up against. Max’s offense includes his fist, knives, his trademark sawed off shotgun, plus something called the thunder stick, which is an explosive rod that Max can ram into any opponent’s chest. 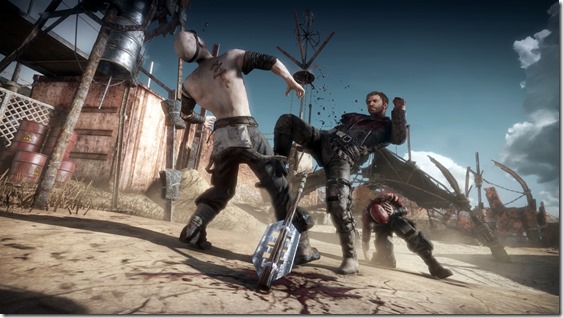 Hand-to-hand combat is brutal. Exceptionally brutal. With blood flying all over the place. It makes sense for sure, given the dog-eat-dog world of the Mad Max universe, but given that most of its ultra violence has been depicted behind a steering wheel, I found myself unusually taken aback by such brutality for whatever reason.

Out-of-vehicle skirmishes look like they could be fun; although, at this point I’d made up my mind that I’d probably much prefer engaging in vehicular manslaughter. I suppose it didn’t help that Mad Max looked exceptionally generic. He’s not a bad model—far from it, just lacking in personality. Though I suppose having him look like Mel Gibson would been difficult, as well as weird.

Yet, there was one part that looked fun; to get from a high elevation to a lower one, Max slides down a rope using his shotgun as a bar. It was here that I was reminded of Avalanche’s previous work, and how much fun screwing around was in Just Cause 2. That game’s lead character was quite versatile, and while Max lacks the combination of hook shot and parachute that made the aforementioned such a blast, I all of a sudden became more interested in the non-vehicle stuff.

Ultimately, Mad Max plays like a RPG of sorts; as you engage in combat, various stats are improved. This applies to both Mad Max and his car. Back to The Jaw; because the Magnum Opus did not have the proper horsepower (or necessary stats) to take it down, the door glowed red, to indicate: “don’t even think about it.”

However, instead of going through the 10 or so hours grinding that would be necessary to upgrade the Magnum Opus’s grill, the demo person simply activated the developer’s debug menu to strengthen the ramming grill. And once that door was taken down, it was a hail of bullets and exploding barrels to end the demo.

In the end, Mad Max doesn’t exactly re-invent the wheel when it comes to sandbox games that take place after the bomb, but at least it appears to be a competent edition to the family, and pretty one at that. Hopefully the final game will be chock full of all manner of references from the movies (and even Babe: Pig In The City, which is loosely connected).