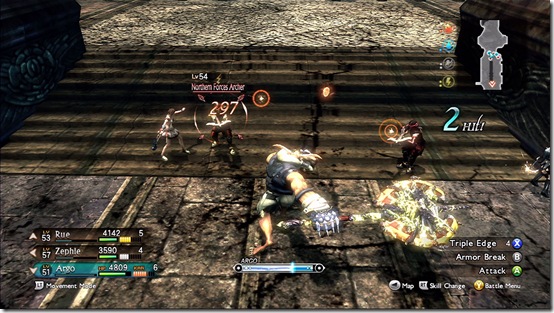 Having never played Magna Carta: Tears of Blood, I came into Magnacarta 2 knowing only: it was a JRPG. After reading the back of the box, which mentions an amnesiac protagonist who ends up playing a key part in the world, I prematurely judged that this was going to be a very cliched, by-the-numbers RPG. Imagine my pleasant surprise when I found myself enjoying the game!

Let’s just toss the overdone story aside and focus on the good aspect of the game: the fighting system. It’s mostly real time with pauses for item and skill selection. Most normal battles start off with pressing a trigger button to initiate combat mode, auto-targeting an enemy (or pressing a shoulder button to switch targets), pressing a button to execute a normal attack or special skill, and then either finishing the enemy if possible, or quick-switching to another teammate. 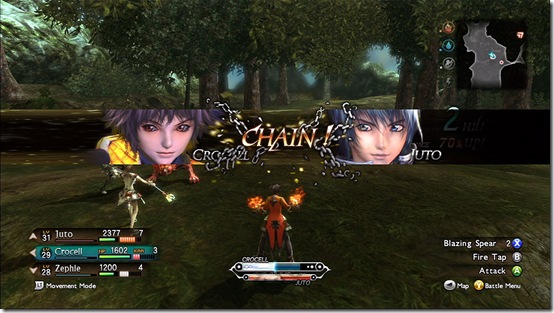 Players can only directly control one character in the team, called the leader, at a time, but switching leaders become second nature thanks to the stamina system. To cut down on button mashing, Softmax put in a meter that quickly fills up as a character attacks. Once it’s full, characters go into overheat mode, which increases their damage output for a short amount of time before putting the character in cool-down mode. Cool-down mode renders the character pretty useless since they can neither attack, use skills, nor items for a few seconds.

After a character goes into overheat mode, it’s possible to quickly switch leaders by pressing the corresponding button on the d-pad. If players attack with the new leader quickly enough to build up a second character’s meter, it’s possible to do a chain attack which when successful will cause a chain break. This drops both the old leader and new leader’s used-stamina bar. This is a good thing, since it allows both team members to reset their stamina meters and continue attacking without going into overheat too soon again.

This all took a good 1-2 hours for me to get used to. Before then, my characters were constantly over-heating. If you think this is complicated, hold on to your hats, it’s only part of the fighting system. 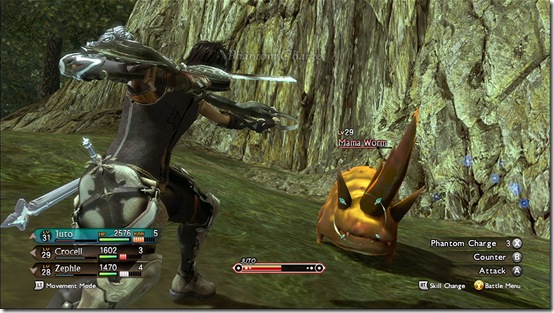 On top of watching the leader’s stamina bar to keep from overheating, there’s also the skills bar to track of. Using skills in Magnacarta 2 uses up something called ‘kan.’ For example, Zephie’s healing skill can use up 2 kan. If there’s not enough kan in the kan meter, you can say goodbye to using that skill.

Unlike other RPGs which let you replenish skills through potions or what not, Magnacarta 2 allows characters to build up more kan by executing regular attacks. And just because a magic user used up all his kan doesn’t mean that he’s useless because he can’t do melee attacks; regular magic attacks use no kan at all! This makes magic users a lot more pleasant to play because all I needed to do was stay far enough from the enemy to avoid being hit (while using my melee teammates as tanks) and just throw regular attacks like fireballs at the enemy until my kan meter builds up. 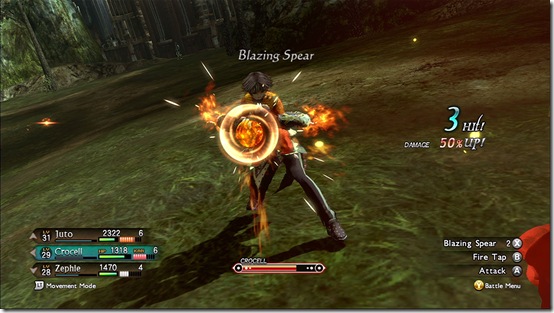 Skills can be upgraded and learned through a skill tree. Each character has a number of skills which can be opened up, not to mention different trees depending on what type of weapon they’re wielding. For example, Juto’s one-handed weapon tree is different than his two-handed one. The variety in team customization can be dizzying once you multiply that by all the different characters that can make up a team.

Once I got used to juggling between leaders and using skills, regular battles started to fly right by. The common enemies were okay in racking up lots of in-game money, trying out new skills, and playing with new weapons, but they do tend to get boring after a while.

That’s one reason why boss battles were fun. They’re a much-needed variation on the weaker, normal enemies and they usually require a different tactic.

Sentinel battles are one of the most common boss fights. They usually have a weak spot, such as their back, which means you’ll have to carefully circle around back there in order to hit them for more damage. Sure, their massive amounts of health and regenerative properties are typical of boss fights, but I still found each of them enjoyable.

Bosses also usually go through a few different phases, so don’t be afraid to switch out teammates to adapt to each phase. I’m one who tends to play favorites when it comes to a game like this, but there definitely are advantages of using one character over another — especially when you take elemental weaknesses and immunities into consideration.

Magnacarta 2 is one of the few RPGs where I actually looked forward to boss fights. Call me chicken, but usually I hate dealing with RPG bosses. Part of why I liked these fights was because after defeating the boss, I felt like it was because I actually used some sort of tactic or skill instead of brute-forcing it — which is something I often end up doing. It just feels like an accomplishment to beat a boss.