Nintendo’s star plumber has been making his rounds outside of platform games and RPGs to step into the world of sports. There have been Mario versions of tennis, soccer, golf and baseball. Mario, Luigi and Peach even made cameos in some EA Sports games like SSX On Tour and NBA Street Volume 3. After slam dunking against Kobe Bryant, a basketball game is a fitting entry into the Mario world. Enter Mario Basket 3 on 3 for the Nintendo DS. Square-Enix originally designed this for their own characters. However, Nintendo saw potential in the title and that Mario would fit right into the game so the two of them switched gears to make the worlds first touch screen controlled basketball game. How does it play? Read on to find out. 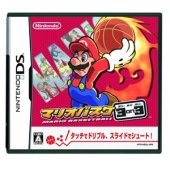 Let’s get this straight, Mario Hoops 3 on 3 is like no other basketball game you’ve played before. The control scheme is set up like no other title out there. Instead of using the face buttons almost everything is done with the touch screen, except movement which uses the d-pad and switching characters by using the L button. If you want to dribble the ball in a different location just tap the stylus to where you want to dribble. To pass you draw a line towards the direction of one of your two partner characters on the screen. Shooting is as easy as quickly drawing a line straight forward towards the hoop. To increase shooting accuracy players can hold the stylus in one place to charge up before shooting. If you want to dunk, run towards the basket while drawing a straight line. Defense is just as easy, draw a straight line from the top of the touch screen towards the player to try to steal the ball. Or jump up in the air by making a straight line from the bottom of the screen to the top (just like shooting) to try and block the ball from getting through the hoop. Players can also do two kinds of air attacks one hits a player mid air and stops a slam dunk. While the other move is a crushing blow to the ground, which if timed properly can knock the ball from your opponent’s hands. The control scheme might not be for everyone so Nintendo employed “traditional” controls which can be switched on in the options menu.

Each character also has a special shot which is done by tapping different points on the screen in order. Most of the shots are based around the first letter in a character’s name. For Mario you begin tapping the screen at the bottom left hand corner, which is the first part of the “M” in his name. Then move up to the top left corner, to the center of the screen then to the top right and lastly to the bottom right to charge up for the special shot. The advantage of the special shot is that it nearly always sinks. Players can even do a special shot from the other side of the court if there is a partner character close to the hoop to pass to.

Special shots aren’t the only addition that separates Mario 3 on 3 Hoops from a traditional basketball game. The scoring system and style of play is more synonymous to an arcade game than a basketball simulator. Like the Mario Kart series, Mario 3 on 3 Basket is filled with items. Mushrooms temporarily give your characters extra speed, red koopa shells can be thrown to knock the ball out of another players mitts and there are stars that give players temporary invincibility. Even the stages have a wacky feel to them. The Super Mario Sunshine level has Petey Piranha as the basket. Petey knocks back players who try to slam dunk on him. The level modeled after Bowser’s castle is filled with traps like lava pits, which can stun a character, Thwomps and bombs (from the Final Fantasy series) running around to distract players. There are some “regular” courts like the Mushroom Kingdom level and Nokonoko beach, but even those have their own twist to the game of basketball. The major change is in the way points are scored. It just isn’t as easy as running up to the hoop and throwing a lay-up.

Getting the ball in the hoop gets 20 points, but the amount of points you get for landing a basket can be greatly increased by collecting coins. Scattered on the floor are question mark blocks that can be activated by dribbling over them (i.e. tapping on the right part of the screen). Often times question mark blocks will bestow players with coins and if you’re really lucky red coins, which are worth ten regular gold coins. After you get a shot in all the coins you have are added to the score plus the twenty points for making a basket. The maximum amount of points you can earn is 120, which equates to 100 coins plus the 20 points for making a successful shot. The coin mechanic changes the entire course of the game because it is more beneficial to run around the court nabbing coins than running straight to the hoop to shoot. Since there is no shot clock players are actually encouraged to spend extra time seeking out coins.

The cast in Mario 3 on 3 Hoops is similar to other Mario sports games. You have Mario, Luigi, Wario, Waluigi Princess Peach, Daisy, Donkey Kong, Diddy Kong, Bowser, Bowser Jr, Hey Ho (Shyguy), PataPata (Koopa Paratroopa), Boo, Birdo and Yoshi in it. Unlike other Mario sports games this game was developed by Square-Enix so as a surprise they brought in characters from the Final Fantasy series. Hidden as unlockable characters are a moogle, white mage, black mage, ninja and a cactuar in the game. Square-Enix also brings in a mimic into the game, a treasure chest that turns into a monster. The addition of these characters fits the game better than it sounds. Instead of an anime look these bonus characters have a style that is similar to Mario and his buddies.

More characters and stages can be unlocked by playing through the game’s tournament mode. In tournament mode the game is broken up to three separate matches each with two periods. The periods in Mario 3 on 3 Basket are short, just two and a half minutes per period, which makes a single match just five minutes. Winning three matches in the Mushroom Cup, Flower Cup, Star Cup or Rainbow Cup earns players some bonus content. Another option is to play a quick match through exhibition mode or hook up with other DS users for some multiplayer action. Mario 3 on 3 Hoops does support DS download play so you can grab a few friends for a quick exhibition game. Or show off your dribbling skills in dribble race where players scramble to run across a finish line while collecting coins and dodging obstacles like Koopa shells. Lastly there is another multiplayer game similar to the battle mode in Mario Kart. Coin Hunter has players run around a small level dribbling their ball to see who can collect the most coins.

Clearly Mario 3 on 3 Hoops is a Mario game more than a basketball game. The familiar sound effects like the star song, 1up chime and Mario’s voice are things Nintendo fans will love.Compared to other DS games Mario 3 on 3 Hoops is a game that almost anyone can get into. It is easy to understand, unique and most importantly fun.

Even though the voice acting is in English, the menus in Mario Basket 3 on 3 are in Japanese. This might pose some initial difficulty when starting the game and learning the controls. Once gamers get past that small hump Mario 3 on 3 Basket is easy to play even if you don’t understand a lick of Japanese.

+ Pros: A unique take on the game of basketball and there is an interesting control scheme that takes advantage of the DS touch screen in a new way. Plus the Square-Enix elements are a surprisingly good match for the game.

– Cons: People looking for a traditional basketball game are looking in the wrong place. Also the computer AI during tournament mode is lacking.

Overall: While the game is about as far from a realistic basketball game as you can get, Mario Hoops 3-on-3 brings elements of the sport into an original and most importantly wildly entertaining game. As long as you’re willing to learn a new control scheme and want a game that’s easy to pick up and play (like Mario Kart) give Mario Hoops 3-on-3 a try.