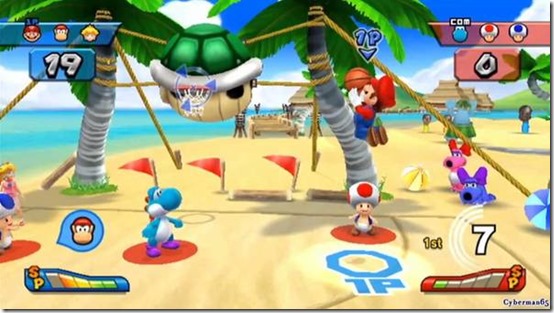 Mario Sports Mix was originally released on the Nintendo Wii in 2011. It’s a sports game collection featuring basketball, dodgeball, hockey, and volleyball. Since it was developed by Square Enix, Final Fantasy and Dragon Quest staples creep in. For example, all of the characters are competing in the sports to earn Sports Crystals, Dragon Quest’s Slime and Final Fantasy’s Black Mage, Cactaur, Moogle, Ninja, and White Mage are unlockable characters, and Behemoths appear as enemies. It’s $19.99 for the Nintendo Wii U.

Wave Race 64 first appeared on the Nintendo 64 in 1996. It is a jet-ski racing game where people pick from four different characters and go around nine different tracks in varying weather conditions, hoping to be the best racer. People are rewarded for accuracy, as going around the buoys properly will offer speed boosts. In addition to Championship, Versus, and Time Trial modes, where speed matters, there’s also a Warm Up training mode and Stunt Mode where you attempt to perform various stunts for points. It’s $9.99 for the Nintendo Wii U.

Mega Man X started out as a Super Nintendo game in 1993. It continued the original Mega Man series’ legacy by introducing Mega Man X, Dr. Light’s last creation. It was a robot with its own mind and was sealed away due to the danger that could come from it not following humans’ orders. Dr. Cain finds X and uses it as the basis for his own series of robots, called Reploids, which become Mavericks when infected by a virus. X becomes a Maverick Hunter who goes after these rogue robots, trying to protect humanity from Sigma and his rogues. It’s $7.99 for the New Nintendo 3DS.