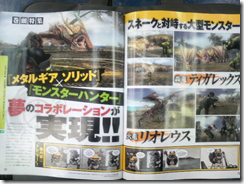 Felynes, the helpful cat creatures, are in Konami’s game too. They act as support characters. Kojima’s team even worked burning meat into the Metal Gear Solid universe. When Snake cooks meat it turns into rations.

This collaboration is sure to be a hit in Japan where Monster Hunter and Metal Gear Solid are hot ticket items. Monster Hunter isn’t as big in the West. Could Naked Snake bring it to the masses?