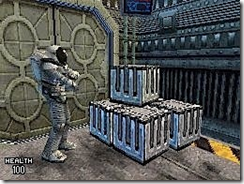 There aren’t many companies brave enough to make a first person shooter for the DS, but developers Renegade Kid make it look like a piece of cake. After the first ten minutes of getting used to the controls, playing Moon on the DS felt like second nature. There were times where I had to rest my hand because I was gripping my DS too tightly, but that’s not a fault on their end.

Moon drops you off on a space station on where else? The Moon. Don’t let the title fool you though — you don’t actually get to see much of the moon once you enter the base. Instead, you’ll see sci-fi looking corridors and after an hour or so, it’ll start to get repetitive. It’s unclear whether it’s a limitation of the DS, or the developers purposely wanted to make the game feel like an old school FPS with repetitive tiled walls.

Speaking of repetitive, the music was the definition of the word. I had to turn it off after about half an hour of hearing the same short segment of music loop about a hundred times. My playing experience actually improved because of that. The eerie silence made it feel like a genuine deserted space station. 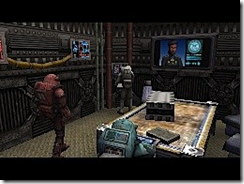 The graphics and the music of Moon bring nothing new, but that doesn’t necessarily mean the game is bad. I actually enjoyed exploring the station. While it’s an FPS, enemies don’t respawn after you kill them, so you can spend your sweet time looking at every nook and cranny. The controls are intuitive (d-pad for movement, stylus for looking) enough that I didn’t have to think about them at all.

I saved my favorite part about Moon for last: the robot. Early in the game, you pick up a small remote-controlled robot that can get into small tunnels you’re too large to fit through. The game sets up lots of puzzles where you have to coordinate using your robot to go through a series of tunnels, not get killed, temporarily disable an electric barrier, and then switch back to controlling yourself so you can go through the disabled barrier and pick the robot up again to use for next time.

Moon is less about fast-paced twitch-action and more about exploring with the occasional puzzle. FPS aficionados who wouldn’t dream of playing a game that gets less than 60fps may want to pass on this. But if you like exploring, don’t mind uninspired graphics, and want a FPS on the DS, Moon is a fine choice.