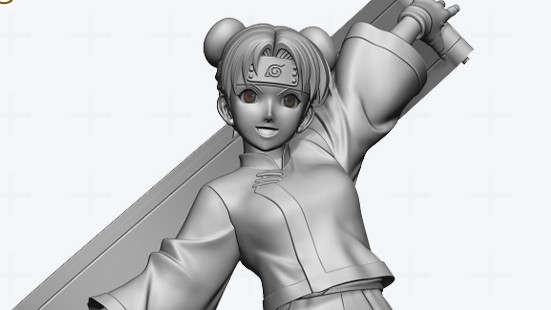 The MegaHobby Plus 2022 First Summer event also meant new looks at upcoming Naruto Shippuden characters. MegaHouse is working on a Naruto Gals Temari version 2 figure and Tenten figure. While there aren’t painted or unpainted prototypes for either yet, the company did show off the 3D designs for both of them.

First, here’s Temari wielding her Giant Folding Fan in her Naruto Gals figure design. She’s in the midst of using one of her techniques, so there’s wind all around her.

Next, here’s how MegaHouse expects the Naruto Gals Temari figure to look. She’ll be unfurling one of her scrolls, which she uses to hold her weapons. She’s also standing atop one of her gigantic, spiked iron balls.

There was one other Naruto figure that appeared at MegaHobby Plus 2022 First Summer. The Precious G.E.M.series Naruto Shippuden
Kakashi Hatake Susanoo version showed up. Pre-orders are already open for that one in Japan. It is expected to ship in December 2022.

is now available for pre-order.
Please find your local distributor.

In addition to the Naruto figures, MegaHouse showed a new Persona 5 Royal Fox figure as part of the event.

The Naruto Gals Temari version 2 figure and Tenten figure based on their Naruto Shippuden appearances are in development. Viz Media handles the English manga localization, while the anime can be seen on Crunchyroll.