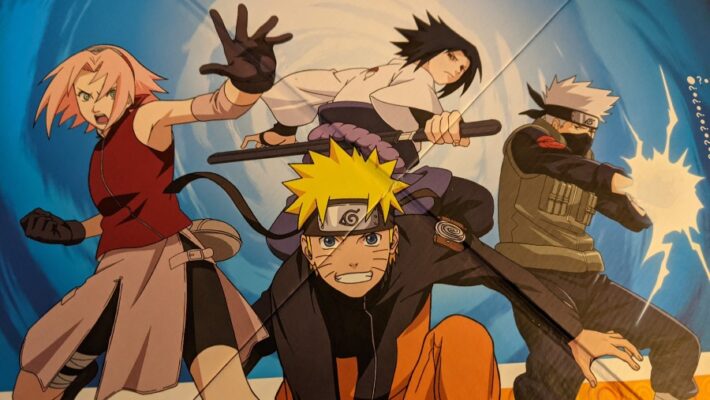 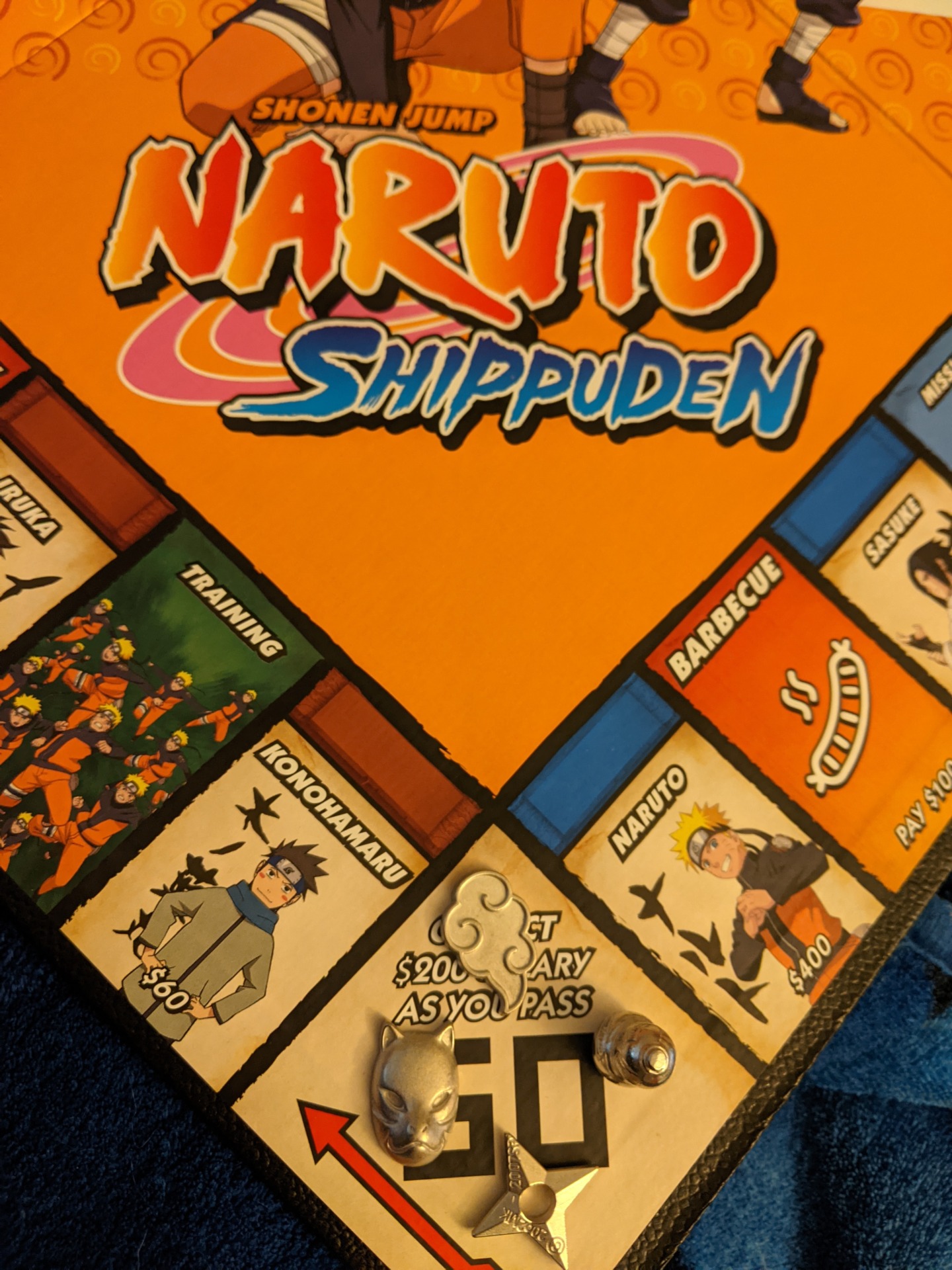 There’s a Naruto Monopoly game out and, instead of taking the approach of buying property around places like the Hidden Leaf Village, it involves buying ninjas. Likewise, instead of placing homes and hotels, you’re placing onigiri and ramen bowls. There’s a hint of a theme there, but there are times when it doesn’t commit to the bit in the same way something like Monopoly Gamer does.

While there is the theme, there’s no functional change to the way Monopoly is played in Naruto Monopoly. Your goal is still to be the last person standing while everyone else goes bankrupt. The back of the box might say “Recruit the best ninjas to show the Hokage that you’re up to the task of leadership,” but that’s the only time that comes up. Which is a bit of a shame, because a rule change that might have prioritized collecting known “teams” or having a certain number of warriors on your side would have done a lot to set it apart. 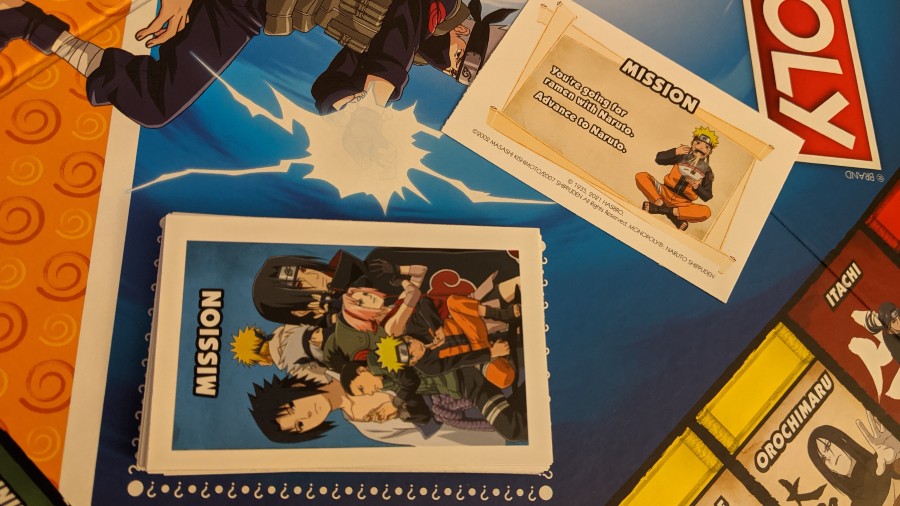 But then, the placement of characters is a bit haphazard for that too. For the most part, teams are properly placed together. For example, the three “pink” properties in Naruto Monopoly are Team 10’s Choji, Ino, and Shikamaru. But then the game also splits up Team 7 by making Naruto and Sasuke into Boardwalk and Park Place and putting Sakura in the Green properties with Kakashi and Sai. (Also, I’m a bit disappointed that the more advanced “legends” like Jiraya, Orochimaru, and Tsunade are only put as yellow properties while people still learning like Naruto and Sasuke are the most expensive ninjas on the board.)

While the naming and terms for items aren’t the same, their functions are. Onigiri are houses, while ramen bowls are hotels. Placing them on a ninja increases their value when someone else stops by. Unfortunately, the food element is only aesthetic and explanation why feeding ninja makes them better. (Perhaps they fight better when eating properly?) The game still refers to this as rent, though if you wanted to “play along” you could pretend you’re paying to “borrow” their services for a mission. Chance and Community Chest cards are Mission and Training cards. They don’t actually give you tasks, but instead are the standard excuses to give you a quick reward. There’s no attempt to change “jail.” Though the railroads are now the Akatsuki members Deidara, Kisame, Itachi, and Pain. 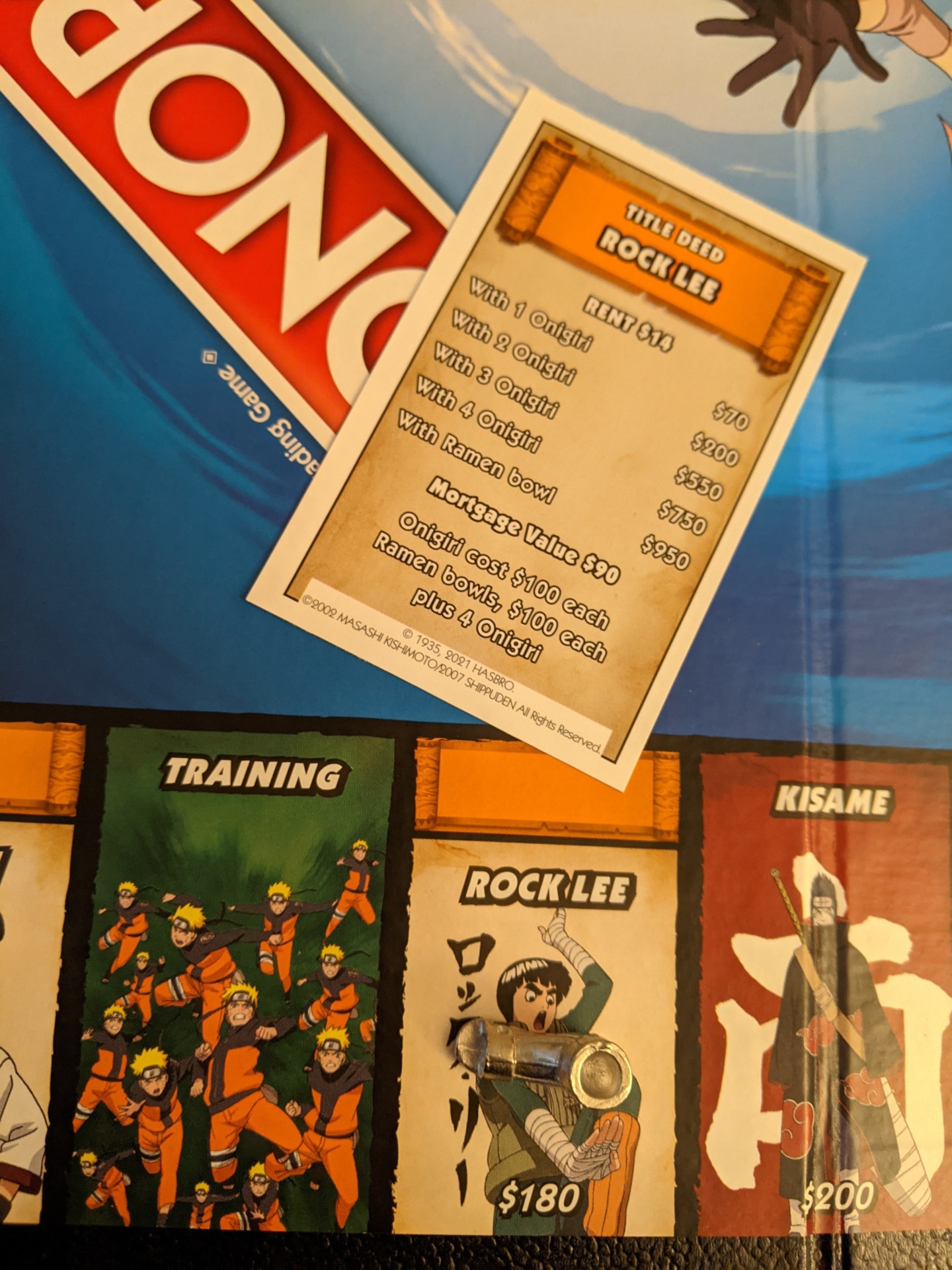 Also, you unfortunately don’t get little figures of characters like Naruto, Sasuke, Sakura, and Kakashi as tokens. Instead, you get an Akatsuki cloud, Anbu mask, boot, Gaara’s gourd, kunai, and shuriken. Which I suppose makes sense, given all of the major characters appear as spaces on the board. It does seem a bit like a missed opportunity to get to “be” your favorite characters from the series.

In general, Naruto Monopoly is fine. It’s a reskinned version of Monopoly, which people might appreciate. As long as someone doesn’t go in expecting character tokens that look like familiar characters or new rules inspired by Naruto Shippuden and its world, they’ll likely have a good time. Thought admittedly, it will always annoy me though that somehow Naruto and Sasuke are the most valuable “properties” in the game.