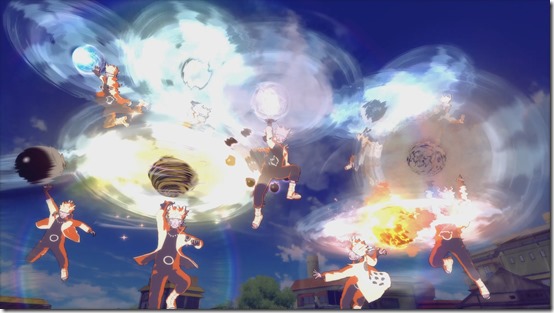 As the curtains begin to close on Naruto, so too must the games covering his story and Naruto Shippuden: Ultimate Ninja Storm 4 covers the last arc of Naruto and brings the Ultimate Ninja Storm series to an end. Siliconera recently went hands-on with the game, exploring a handful of the story missions that were on show as well as exploring the versus mode.

Just a heads up, there will be some spoiler content ahead for who haven’t reached The Great Ninja War that wraps up the series. 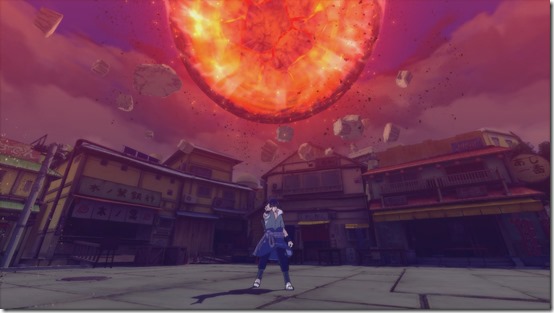 Now, I never really got into Naruto though but I did read it as the series approached its end via the English version of Weekly Shounen Jump so I was familiar with some of what I saw in the game. What I was a fan of however, was CyberConnect2’s own anime tribute, Asura’s Wrath. Little did I know that the style of gameplay used there had been carried over into their Naruto games and what a perfect fit it is for the series.

Each story mission plays out as if it were an episode of the anime series and features a handful of battles. The cutscenes use a mix of stills from the series along with the in-game scenes to tell the story. The first story mission I played puts you in control of a young Kakashi and Obito in their attempt to save Rin from her kidnappers. In these battles, I was in a cave, fighting on the ground then seamlessly running onto and fighting on the walls which was a really nice touch. It’s the kind of scene that you see in the anime or manga but one that rarely makes its way to the games. I could see the stream of battles within a story mission become repetitive, but thankfully each individual battle lasts only a few minutes and each successive battle seemed to bring in a new element to keep things fresh, whether that was a different opponent or a change in my powers or character. 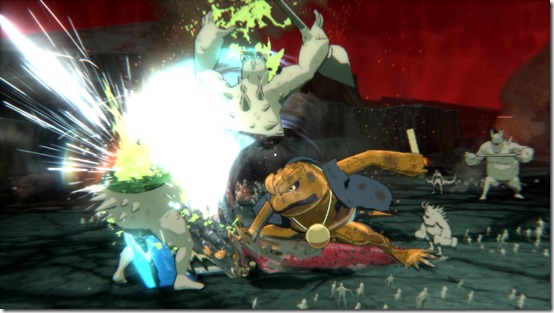 Not all the story missions are done in a battle arena format however, as a later mission against Ten Tails played similarly to a rail shooter. Whilst playing as Naruto in his beast form, you circle Ten Tails, shooting parts of its body until it eventually collapses, giving you a chance to really deal some damage. The last story mission I could play puts you in the shoes of Naruto in his beast form again, only in a regular battle against Obito. Naruto’s beast form is slow but powerful, you can really feel the weight of the blows being dealt in battle. You’re joined in this mission by Sasuke as a support character who you can called in to sneak an extra attack in, if you time it right. As you reach the last battle of a mission, you’ll usually come across some quick time events either pressing a button or selecting a certain direction. One area I can’t give any faults with is with its visuals as it’s a real stunner. CyberConnect2 has really nailed the cel shaded look and it can feel very cinematic at times as well.

Moving onto Naruto Shippuden: Ultimate Ninja Storm 4’s versus mode, the first thing that stuck me was the amount of playable characters you can choose from. There’s genuinely several pages of them to flick through and characters that have different forms are accounted for as well. What’s more is that each of the characters I tried playing as felt unique, each having their own special moves and such. The actual fighting in battle was surprisingly accessible and it doesn’t take long to grasp the basics. You can fight either on your own or as part of a team, though when playing as a team, your life bar is shared between characters. An individual character has an awakening ability, in Naruto’s case this is his beast form or if playing as a team, you can pull off a linked attack that combines the powers of all of your party members. When I had Naruto and Sasuke in my team, they had some interaction together while performing the move but given the huge amount of characters, I can’t say how many of the other characters will have that degree of interaction. Also after taking so much damage, character’s will become visibly damaged.

CyberConnect2’s Hiroshi Matsuyama has been vocal about his studio’s love of Naruto and so far, it really shines through in Naruto Shippuden: Ultimate Ninja Storm 4. Even as someone who never got into Naruto, I’ve come away impressed with just how good it looks and the amount of detail and effort that’s clearly gone into it. While I’ve only had a small peek of what the full game has to offer, it feels like it’s going to be crammed with everything a fan could ask for.