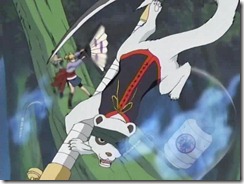 Namco Bandai will release a playable demo of Naruto Shippuden: Ultimate Ninja Storm Generations on January 24, according to Jump. While the news is for Japan, you should be able to download the demo with a Japanese PSN or XBLA account.

The magazine also confirmed Gaara, Kankuro, and Temari as playable characters. All three Sand Siblings will have their costumes from the Five Kage Summit. Screenshots show Kankuro using the Puppet: Early Summer Rain technique from Ultimate Ninja Storm and Temari’s Kamatari summoning technique. Naruto has a new technique where dozens of shadow clones barrage an opponent with rasengans.