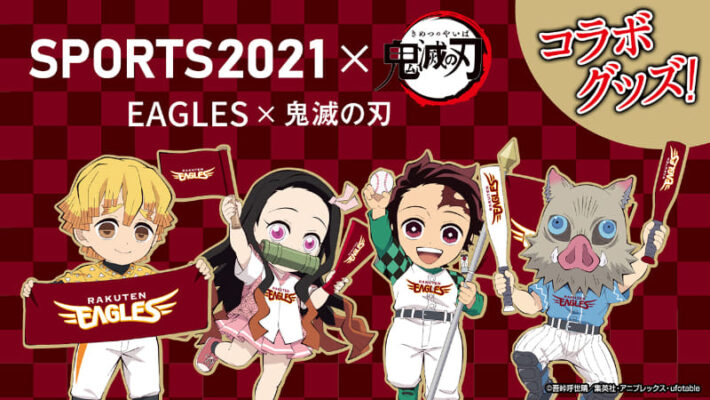 The Japanese baseball team Rakuten Eagles revealed new merchandise items featuring characters from the famous Demon Slayer franchise. Pre-orders will be available on the Rakuten web store from August 13 to 23, 2021. The team’s sponsor will deliver the finished products in late October 2021. [Thanks, Game Watch!]

The collaboration will feature four Demon Slayer main characters — Tanjiro, Nezuko, Zenitsu, and Inosuke — drawn in chibi proportions and dressed in Rakuten Eagles uniforms. The prices will vary depending on the item. The clear files are the cheapest at just 450 yen. The most expensive items at 4,000 yen are cushions and bath towels.

Demon Slayer is not the only franchise to provide new merchandise for Rakuten Eagles. The baseball team also previously released items with special designs of the Slime and Golem from Dragon Quest Walk, Square Enix’s mobile game that has also gained popularity in Japan.

The Demon Slayer franchise has become so popular that it is getting all kinds of merchandise being made. The items range from a large Nezuko PC cushion, UNIQLO apparel, to perfumes inspired by Tamayo and Akaza.

The franchise’s first-ever console video game, Demon Slayer: Kimetsu no Yaiba – The Hinokami Chronicles, will be available on PlayStation 4, PlayStation 5, Xbox One, Xbox Series X, and PC worldwide on October 15, 2021.