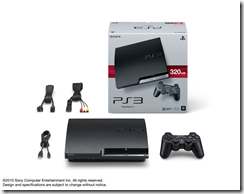 Sony is also preparing 160GB PlayStation 3s in black and classic white. Each one of these has a suggested retail price of 29,980 yen ($341). It seems like these models will replace the 120GB PlayStation 3, which will switch to “open” pricing in Japan starting on July 7.

These new PlayStation 3s and a terrestrial digital recorder pack with Torne hit stores on July 29.