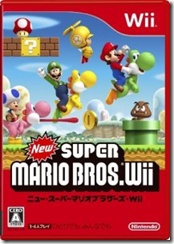 Dragon Quest IX: Sentinels of the Starry Skies also claimed a trophy. Actually, two of them. It was the top selling game in Japan and won an excellence award.