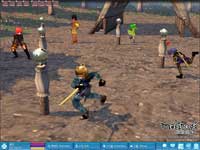 When I think of Nexon Kart Racer and Maple Story come up first. Mabinogi is one of their lesser known projects in North America, but that’s about to change. On January 30, Nexon is starting a closed beta to give US gamers a taste of their 3D MMO world. I’ve been told that Mabinogi has been successful partially because of its flexible skill system. What makes this news even more interesting is Nexon is working on an Xbox 360 version of Mabinogi for Korea. Perhaps, they’re thinking about bringing it to North America too. It’s a feasible possibility considering the console’s large install base. Before that happens we will have to see how the Western world reacts to Mabinogi after the closed beta begins.