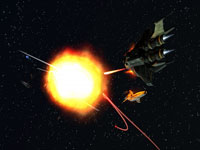 Just got an e-mail in from Sierra confirming that Battlestar Galatica is going to be on Xbox Live Arcade on October 24. For 800 Microsoft Points ($10) you get ten single player missions based off the TV series, online play for eight players and eight ships (4 Human / 4 Cylon). One day before the Xbox 360 version comes out Sierra is going to release a PC version for $19.99 as a downloadable game. The extra $10 gets you frantic deathmatch battles for 16 players.