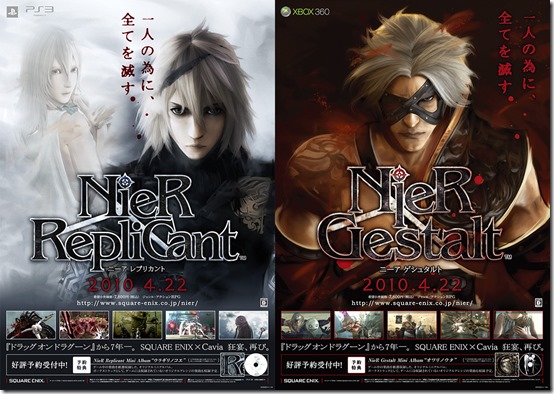 NieR RepliCant and NieR Gestalt first released nine years ago today for the PlayStation 3 and Xbox 360 as an action RPG spinoff of the Drakengard series by Yoko Taro. Today NieR celebrates its 9th anniversary.

NieR originally released in Japan as NieR Gestalt for the Xbox 360 alongside NieR RepliCant for the PS3, which was based on NieR Gestalt with a different protagonist design, time that it takes place, and such.

The above is a look at the first trailer that revealed NieR at E3 2009. NieR Gestalt, shortened to NieR in the West, would become the only version that released in North America and Europe while NieR RepliCant remained a Japan-exclusive title.

Check out the English-dubbed trailer for NieR.

NieR was developed by the now-defunct studio Cavia which consisted of Yoko Taro and several former-Namco staff. Cavia also had plans for a PS Vita version of NieR, as Yoko Taro and producer Yosuke Saito wanted to expand on the audience of the NieR IP with something new, but at the time it ended up being scrapped due to the development studio Orca being busy on Dragon Quest X.

While it was unfortunate that the PS Vita version of NieR never came to fruition, it inadvertently led to the eventual development of NieR: Automata by PlatinumGames, as the decision to approach them came from not having done a NieR game in five years at the time. Had they made the PS Vita of NieR and approached PlatinumGames a year or two later, it may have been a different story.