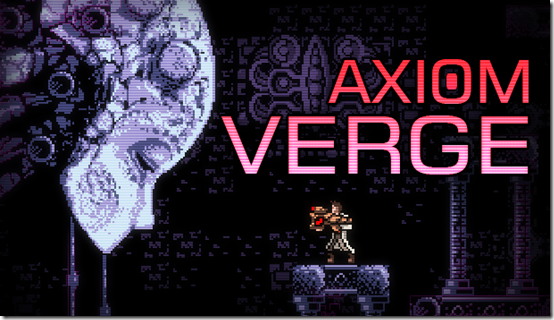 Yesterday, an Ask Me Anything was held over on Reddit for Axiom Verge, the indie Metroidvania title by Thomas Happ Games. Tom Happ, the game’s creator, and Dan Adelman were present to answer questions from fans.

Because of the Axiom Verge’s strongly Metroid-influenced gameplay and graphical style, one fan asked if there was ever the thought to include a Samus cameo or Samus amiibo support into the game. Adelman replied that they had wanted to include a code that would unlock a Samus costume for Trace, but Nintendo ultimately decided against it.

“We would have loved to have a secret code to have Trace where a Samus costume. Some people inside Nintendo really liked the idea, but after a lot of internal discussion, they ultimately had to decide not to give us permission to do that. I think the idea that someone could play the entire game of Axiom Verge looking like Samus Aran was too big of a concern for them.

There is a similar kind of callback, though. If you type JUSTIN BAILEY into the passcode tool, it has Trace in a leotard, just like in Super Metroid.”

Axiom Verge is available for PC, PlayStation 4, PlayStation Vita, and Wii U. An Xbox One version is scheduled to release later this year.