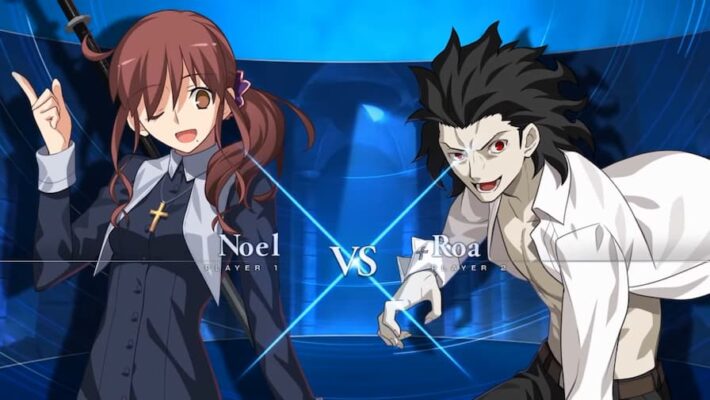 Type-Moon released a brand new Melty Blood Type Lumina trailer, this time pitting Michael Roa Valdamjong and Noel against each other in battle. Roa is a vampire and the main antagonist of the Near-Side Moon routes in Tsukihime, while Noel is an Executor whose hometown was destroyed by Roa. This trailer, like previous ones, is three and a half minutes long and shows off tons of combos and techniques.

In the trailer, we see Noel utilize the range and fluidity of her polearm strikes, while Roa is a fast fighter whose combos put pressure on his opponents. Melty Blood Type Lumina versus trailers often feature high-level play, demonstrating many gameplay techniques that players will have access to during their own matches. Techniques featured in the latest trailer include a special cancel, well-placed blocking and shielding, and Heat wakeups which was also shown to be vulnerable to shielding.

The previous trailer showcased the twins Kohaku and Hisui duking it out in combat. The one before that featured a battle between Akiha and Arcueid, who are both heroines in the franchise as well as each other’s rivals. It was also stated by Tsukihime writer Kinoko Nasu in a recent Famitsu interview that her team shared scenarios and development details with the Melty Blood team to ensure consistency between the two games.

Melty Blood Type Lumina will release for the Nintendo Switch, PlayStation 4, Xbox One, and PC via Steam on September 30, 2021.