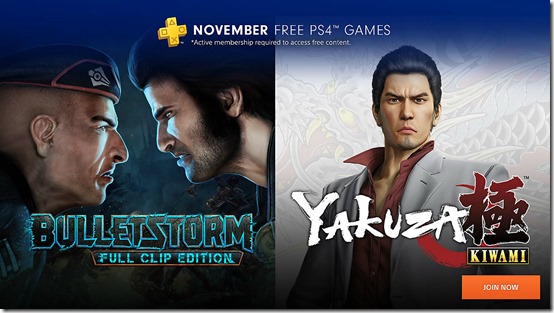 Sony has apparently leaked two of the upcoming PlayStation Plus games in North America for November 2018. If people visit a section of the official PlayStation website, they will see a banner that notes Yakuza Kiwami and Bulletstorm: Full Clip Edition will be among the Instant Game Collection additions for those with PlayStation 4s. Both games are improved versions of older titles.

Yakuza Kiwami is a remake of the PlayStation 2’s Yakuza. In the action adventure game, we learn how Kazuma Kiryu found himself imprisoned for someone else’s crime and disgraced, then how he ends up defending and caring for a young girl named Haruka. This new version included the Majima Everywhere feature, which can have Goro Majima popping up to challenge Kiryu, and tells us more about Akira Nishikiyama, the man who was once one of Kiryu’s closest friends.

Bulletstorm: Full Clip Edition is the remaster of the PlayStation 3, Xbox 360, and PC’s Bulletstorm. In this first-person shooter follows a group of former Confederation of Planets black ops team members who have become space pirates. After crash landing on a resort planet invested with mutants, they have to find out what is going on, survive, and try to get off of the planet.