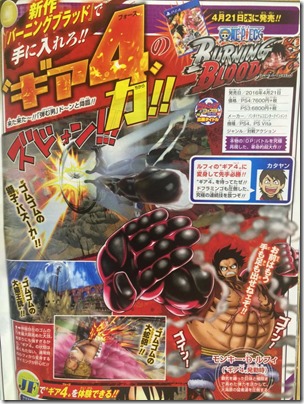 Bandai Namco revealed in this week’s issue of Jump magazine that One Piece: Burning Blood will release in Japan on April 21, 2016 for PlayStation 4 and PlayStation Vita for 7,800 yen and 6,800 yen, respectively, plus tax. [Thanks, @Kazu4281.]

The magazine also shows us a look at Luffy in his Gear Fourth form, which will be available to try out at a Jump Festa 2016 demo.

One Piece: Burning Blood will release in the West in 2016 for PlayStation 4, PlayStation Vita, and Xbox One.