Since it began in 2004, Hamster’s Oretachi Game Center Zoku series has been somewhat unimpressive. For 2000 yen, you get a single emulated arcade game for the Playstation 2, along with a Superplay DVD and a soundtrack CD. It seems fitting for collectors, but the selection of games has been a bit lacking. Games like Scramble and Yie Air Kung Fu have been available on other compilations for years. More recent installments like Nekketsu Koukou Dodge Ball Bu (Super Dodge Ball) and Contra featured arcade renditions of games that had already received decent home ports. But the Akumajou Dracula arcade game – part of the Castlevania series and known as Haunted Castle in the Western world – had never seen release on a console. Finally, gamers can get a chance to play one of the forgotten games of the series without having to resort to emulation. 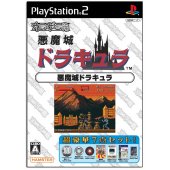 Unfortunately, Haunted Castle is the proverbial skeleton in the closet for the Castlevania series. Released just after Castlevania 2: Simon’s Quest had come out for the NES (at least in America), Haunted Castle plays just like the first game in the series, in that you walk forward, whip things and walk forward some more. It’s pretty standard, but Konami managed to screw it up because of the ridiculous difficulty level, undoubtedly to suck plenty of cash from persistent gamers. Your character – who was represented by a mush of brown and yellow in the NES Castlevania and here is a brutish Conan look-a-like with a page boy hairdo – slowly shuffles forward and manages to attack without much speed or power. Even the weakest of enemies take multiple hits, and trying to fight multiple foes – especially the aggravating hunchbacks in the third stage – is somehow even more frustrating than the sadomasochistic boss fights from the first game. You’re only given a limited number of continues, so even if you (metaphorically) pump the game full of quarters, you can only get so far before you’re forced to start over.

If it weren’t for the difficulty, Haunted Castle would be a fairly decent game. In some ways, the game doesn’t much feel like Castlevania, since there are no candles to whip, and power-ups only come sparsely from fallen enemies. Its six stages are pretty short, but there are number of notable set pieces. The second level contains a waterfall that turns into strange, pinkish blood. When walking through the hallway of the third level, you temporarily get sucked back into Ancient Greece to fight against some harpies against the backdrop of some Atlantean ruins. Later in the stage, a pair of eyeballs pop out of the background that blink, stare, and eventually bounce after you. It exudes the same creativity that Konami has become famous for, even if the gameplay is massively crippled.

For a game from 1988, Haunted Castle looks relatively decent, though not up to the standards of Super Castlevania IV for the SNES. The sprites are ugly and poorly animated, but the backgrounds make nice use of colors, especially the oppressively apocalpytic sky at the end of the second level. The later levels do get a bit dull – I guess the designers figured nobody would ever make it that far.

Not even the gamer who plays on the “Superplay” mini-DVD. In theory, super plays should show a perfect (or near perfect) run of the entire game. Here, the player barely makes it to the end of the third level before the video stops. The rest of the DVD just contains advertisements for the other Oretachi Geesen series. The soundtrack mini-CD is more welcome, because Haunted Castle has the same excellent music that the Castlevania series is known for. The sound synth is mighty impressive, and most of the songs are memorable. Some of them have even been remixed in Aria of Sorrow for the GBA and Dawn of Sorrow for the DS. Even though there are only eighteen tracks, including the sound effects track and bonus remix, Castlevania music junkies may find this collection worth it for the CD alone. Since this is a budget release, the packaging feels very cheap, and the mini discs come in very flimsy thin cardboard packaging. The rest of the bonus materials – a small gameplay guide and a trading card – are pretty worthless.

The emulator used to run the game is also pretty underwhelming. There’s an option to set the screen size, but no way to change filters or turn on progressive scan, making for a game that looks pretty ugly on a television screen. Additionally, it has problems with vsyncing at certain areas, resulting in some annoying screen tearing. Some kind of hack to turn on infinite credits would have been greatly appreciated, but other than changing the difficulty in the option menu, there’s not much you can do to make the game easier.

There’s almost no text in the game, although the emulator options are in simple Japanese.

None of the Oretachi discs have been released outside of Japan, so it’s highly unlikely, unless someone bundled them together into a single release.

– Cons: The game is so difficult that becomes massively frustrating by the halfway point.

Overall: Akumajou Dracula/Haunted Castle has many of the elements that have made Castlevania so popular, but the game’s way too difficult to even remotely enjoy. The whole package is really made for diehard Castlevania fans and no one else.