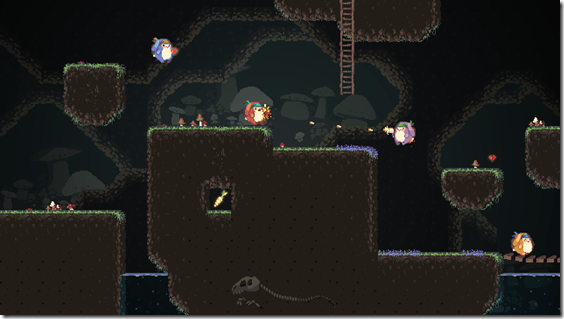 Q-Bit Games and Sleepy Sheepy are working on a bizarre exploration-based platformer about bunnies with guns and jetpacks called Holobunnies. The plan is to bring the game to Wii U and PC, and perhaps more platforms, too.

The Holobunnies are a bit like the rabbit version of the Teenage Ninja Turtles, in that they all kick ass and have job titles like Danielle the witch, Mephisto the ninja, Roméo the bard, and Leenox the scavenger. Each of them have a unique ability, such as life leech and increased running speed, as well as their own preferred weapons.

Apparently, the Holobunnies live with creates called “the machetes”, who have had their eyes stolen, and so it’s up to you as one of the bunnies to head into The Pandemonium to stop the eye-stealing. I told you it was a bizarre game.

Primarily, Holobunnies is an action platformer designed with speedrunners in mind. But for those who like exploration, there are Golden Carrots behind breakable walls and in other hidden areas to find and collect. With these, you’ll unlock character customizations including a mustache, rainbow colored jetpack fuel, and special voice packs.

Aside from the single player experience, there will also be a four player versus mode with arena battles such as Catch the Carrot.

Holobunnies will be up on Kickstarter on October 25th. The amount of funding it gets will determine what platforms it comes to and the features it will arrive with.