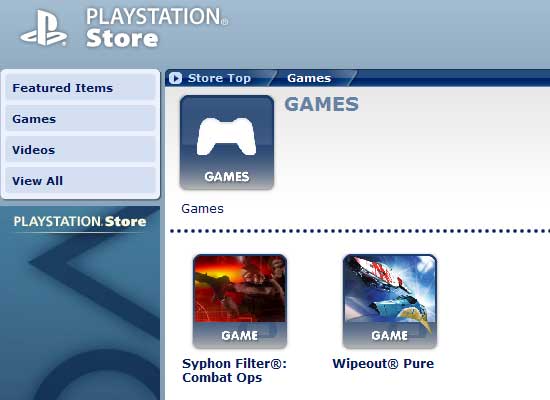 A few months ago Sony opened up a PC version of the Playstation Store in Japan to allow PSP owners to purchase Playstation Classics. Today, Sony is opening the store in North America and while it is lacking in PS1 games it has downloadable PSP games.

Instead of buying Wipeout Pure (one of the best PSP games out there) on a UMD disc you can get a 156 MB file for $14.99. Sony even has a brand new downloadable game, Syphon Filter: Combat Ops, an eight person online shooter with mapmaking community features. That doesn’t sound like a bad deal for $9.99. The meager selection of PSP classics is available, just in case you wanted to purchase Tekken and didn’t have access to a Playstation 3. There is a video tab only has trailers at the moment, but don’t be surprised to see Sony selling movies and TV shows there too.

I think selling downloadable PSP games is a brilliant idea. Hopefully, this opens the door for indie PSP games or at the very least a PSP port of Everyday Shooter.