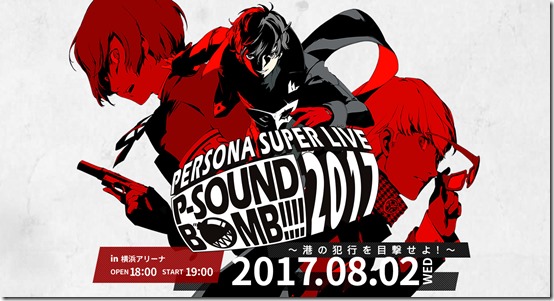 Atlus announced that they’ll provide a paid live stream for the upcoming special concert for the Persona series, Persona Super Live P-Sound Bomb!!!! 2017 ~Witness the Crime at the Harbor~ in Yokohama Arena on August 2, 2017.

The live stream will be available over at NicoNico Live for the price of 1,500 yen. Keep in mind that the event is region-locked to Japan only, so we’ll leave it to you guys to figure out other means of watching it if you’re not in Japan.

The concert takes place on August 2, but tickets will be available for the online stream starting 6:00pm JST today through August 6, 2017. General tickets started its sales in June 24.

Atlus showcased the very first gameplay footage of Persona 5 during the Persona Super Live Concert back in February 2015, so there’s a good chance that we might get something special out of this concert as well.