The Pokemon Company is collaborating with multiple companies to release Piplup-branded snacks in Japan. It worked with Lawson and Grapestone to produce Karaage-kun fried chicken and Tokyo Banana confections decorated with Piplup. [Thanks, Game Watch!]

Lawson will also hand out a limited amount of Piplup’s promotional cards for the Pokemon Trading Card Game. It will be available to those who purchase two specified confections on September 21-27, 2021. 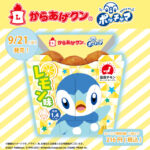 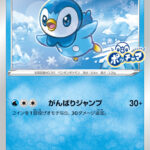 Meanwhile, Grapestone will sell Tokyo Banana confections decorated with Piplup. It will be the third Pokemon to receive this treatment after Pikachu and Eevee. There will be six different designs showing the popular Pokemon with various expressions. The one where Piplup launches Bubble Beam will appear with a rarer frequency than others.

The Piplup Tokyo Banana will appear first in Tokyo, Kanagawa, Chiba, and Saitama prefectures on October 2, 2021. Grapestone will add more prefectures in the following weeks. It will be available in all 47 prefectures in Japan by the end of October 2021. 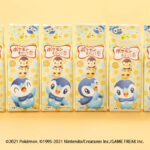 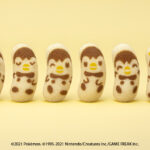 The new Piplup branded snacks are part of Project Pochama. The Pokemon Company launched this project in March 2021 to promote Piplup, one of the three starter Pokemon that players will choose in Pokemon Brilliant Diamond and Shining Pearl. The company is also accepting pre-orders for an oversized plush of Piplup, which it will ship to Japan in February 2022.

Pokemon Brilliant Diamond and Shining Pearl, remakes of the Nintendo DS titles Pokemon Diamond and Pearl, will be available for Nintendo Switch simultaneously worldwide on November 19, 2021.