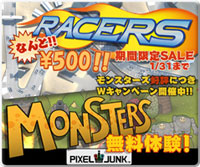 Starting Thursday, Sony will sell PixelJunk Racers, the first PlayStation Network game developed by Q Games, at almost half cost. PixelJunk Racers will drop to 500 yen ($4.60) instead of the usual 900 yen ($8.50) price until the end of the month.

The discount is only for the handful of PlayStation 3 owners who have a Japanese PlayStation Network account loaded with yen, but Sony also has something for the world. A demo of PixelJunk Monsters is sitting in the Japanese store waiting to be downoloaded. Get a free taste of PSN tower defense early, two days before Sony releases it on the US PlayStation Store.