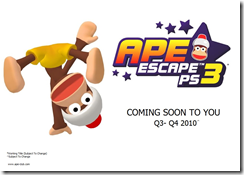 Sony sent out a preliminary a list of PlayStation Move titles about a year ago. An Ape Escape game was on the list and it’s on deck for release. Over Twitter, Sony announced Europe is getting Ape Escape PS3 (working title) in Q3-Q4 2010.

While the tweeter didn’t give specifics, s/he posted hints and concept art. 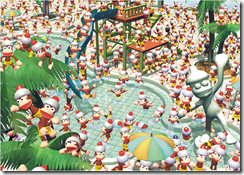 Something no other Ape Escape games have? Could that be PlayStation Move support? The “it’s a keeper” line made me think of a zoo keeper. So, I’m imagining an Ape Escape game where you have to keep manage captured monkeys and wash their underpants.

In Piposaru 2001, an unreleased in the West Ape Escape game, Spike had a giant vacuum cleaner which sucked the underpants off crazed monkeys so he can throw them in a giant washer machine. “If you loved "Piposaru 2001" you’ll love Ape Escape PS3,” the ApeClub account tweeted.